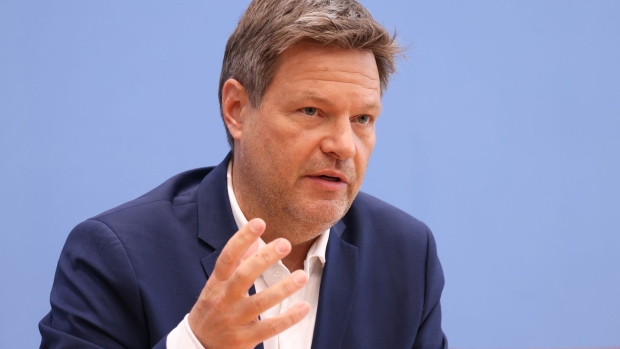 A section of pipework at the Radeland 2 compressor station for the European Gas Pipeline Link (EUGAL), a downstream pipeline for Nord Stream operated by Gascade Gastransport GmbH, in Radeland, Germany, on Friday, March 11, 2022. The European Union, which is dependent on Russia for about a third of its gas consumption, laid out measures this week to wean the region off Russian supplies this year but any immediate disruption would have widespread economic consequences, with soaring wholesale prices crippling industry and sending inflation even higher. Photographer: Liesa Johannssen-Koppitz/Bloomberg , Bloomberg

(Bloomberg) -- Germany could weather a ban on Russian gas in the upcoming winter so long as it fills storages, progresses on LNG terminals and cuts consumption, Economy Minister Robert Habeck said in an interview with WirtschaftsWoche.

The ability of Europe’s largest economy to endure a halt “is subject to several preconditions” but was doable, he told the magazine. The comments come as Germany is planning four new floating liquefied natural gas projects and fast tracking approvals to slash its dependence on Russian gas.

But replacing all of the Russian volumes will be a difficult undertaking, with the country receiving more than half its supply from Russia last year. Executives of companies including EON SE have said it’s unlikely the German government will support any European Union embargo on Russian gas because the impact on the economy would be massive.

If German gas storages are full by the end of this year, and two of the four floating LNG terminals it’s planning are connected to the grid by then, “we can get through the winter to some extent in the event that Russian gas supplies are cut off,” Habeck said.

The prognosis also hinges on industry and households reducing energy consumption by 10% “to avoid getting into an emergency situation,” Habeck said.

He added that he supported the European Union’s efforts to “intensively” seek dialogue with Hungary, where Prime Minister Victor Orban has hardened its public stance against a ban on Russian oil purchases, saying it would withdraw its veto threat only if its imports via pipelines are excluded.