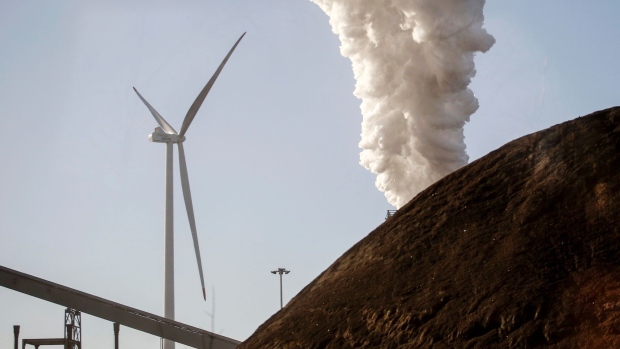 A wind turbine operates beyond a stack of iron ore at the ArcelorMittal SA Ghent steel plant in Ghent, Belgium, on Thursday, March 17, 2022. While the European Union discusses massive borrowing to finance energy projects that would help wean the bloc off its dependence on Russian gas, ArcelorMittal European Chief Executive Officer Geert Van Poelvoorde said using hydrogen to decarbonize the Ghent plant -- which produces 3.6% of the EU's steel -- would require "massive energy" with four gigawatts of power capacity. Photographer: Valeria Mongelli/Bloomberg , Bloomberg

A common 10-point progress report drawn up in cooperation with Canadian Minister of Environment and Climate Change Steven Guilbeault will be released at the end of October.

It’s an evaluation of the so-called Delivery Plan, under which developed countries committed more than a decade ago to mobilize $100 billion in public and private funds annually for climate adaptation and renewable energies in less developed countries. As the target was missed in 2020, at COP26 in Glasgow the nations reaffirmed their determination to reach it by 2025.

“We want to discuss and see what still has to happen,” Morgan said at a World Energy Council conference in Berlin. “It is not acceptable that this 100-billion goal is not yet reached.”

Germany will also reach out to the World Bank to make changes to the plan, Morgan said, adding that she hoped for a tangible contribution from Australia also. “We try to make our fair share as Germany and others also have to catch up.” Berlin has so far committed to deliver $6 billion annually to 2025.

The role of the financial system will be an important topic at the COP27 gathering in November, the deputy minister said.

The 27th Conference of the Parties to the United Nations Framework Convention on Climate Change will take place in Sharm el-Sheikh, Egypt, from Nov. 6-18.