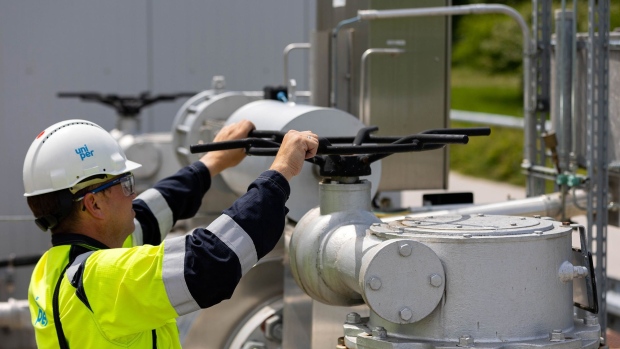 An employee adjusts a control valve at the Uniper SE Bierwang Natural Gas Storage Facility in Muhldorf, Germany, on Friday, June 10, 2022. Uniper is playing a key role in helping the government set up infrastructure to import liquified natural gas to offset Russian deliveries via pipelines. , Bloomberg

(Bloomberg) -- Germany reduced its consumption of natural gas in the first five months of this year, with the decline deepening in May, an industry lobby group said. Only part of the drop was due to a milder winter.

Consumption slid by 35% in May compared with the same month a year ago, according to a statement from BDEW, which represents 1,900 energy and water companies. Adjusted for temperature effects, the drop was 11% last month.

“We think gas demand is falling mainly due to rising gas prices,” said Kerstin Andreae, head of the group. Calls for industry and consumers to use less also play a role, she said.

Businesses and consumers in Europe’s largest economy face the prospect of a dramatic power crunch as Russia reduces supply of natural gas that’s needed for everything from running industrial turbines to heating homes. Chemical giant BASF AG said last week it may cut its production as gas prices surge.

Power generators, which typically account for about 10% of the nation’s demand, have also used less gas this year. The month of May was an exception, partly due to lower availability of power from renewable sources.

Germany’s total gas consumption fell by 14% to 460 billion kilowatt hours in the first five months of the year, according to BDEW.