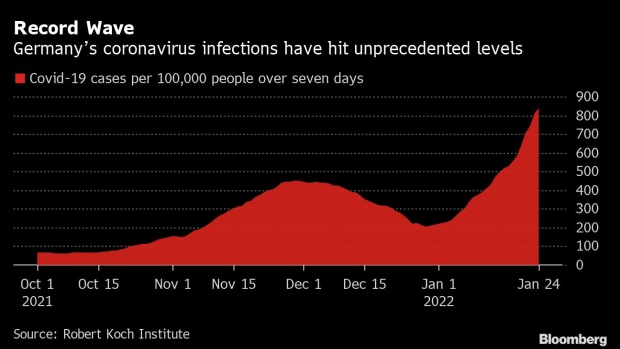 A closed terrace area outside a restaurant in central Berlin, Germany, on Friday, Jan. 7, 2022. Germany tightened restrictions on access to restaurants and cafes and vowed to accelerate vaccinations in an effort to keep the rapidly spreading omicron strain of the coronavirus in check. , Bloomberg

(Bloomberg) -- Germany is set to keep current pandemic restrictions in place for the time being as coronavirus infections surge to unprecedented levels.

Ahead of strategy talks on Monday, officials all but ruled out steps to ease restrictions such as limits on access to restaurants, bars and theaters targeting mainly unvaccinated people. But German authorities are already looking ahead to looser curbs.

When the wave subsides, “then of course we can’t keep the restrictions and we would relax them step by step,” Health Minister Karl Lauterbach said in an interview with ZDF television late Sunday. “It’s right that we are already looking at this.”

The Harvard-educated epidemiologist said the current surge is due to peak around mid-February. Germany again reported a new record in its contagion rate on Monday.

Chancellor Olaf Scholz will host a call with the 16 state premiers starting at 2 p.m. in Berlin. He underscored Friday that Germany already has some of the strictest contact curbs in Europe and said the nation’s vaccine and booster campaign would help see the country through the latest surge.

Germany reported more than 100,000 new Covid cases on four straight days last week, evidence that omicron is rapidly spreading in Europe’s biggest economy. Lauterbach has warned that there will likely be several hundred thousand new infections within the next few weeks, mirroring the surge in countries like France and Italy.

At the same time, there are signs that the strain is less deadly than other variants, though Covid cases in German ICUs have recently inched up after falling steadily for more than a month.