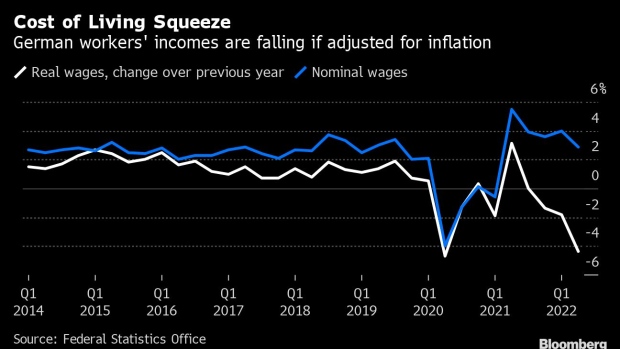 The assembled fuselage of an Airbus A320 narrow-body passenger twin-engine jet airliner moves across the Airbus SE factory floor in Hamburg, Germany, on Tuesday, Feb. 27, 2018. Airbus's plan to further lift production of its A320neo jet faces resistance from both engine suppliers after Safran SA joined Pratt & Whitney in suggesting the move would strain resources to the limit. Photographer: Krisztian Bocsi/Bloomberg , Bloomberg

(Bloomberg) -- As Germany grapples with an energy crisis threatening its future as an industrial leader, an acute shortage of workers is compounding problems for manufacturers already struggling to stay competitive.

The lack of qualified labor -- brought on by an aging population and exacerbated by the pandemic -- is starving manufacturers from Airbus SE to BMW AG to BASF SE of the staff they need to keep pace with demand. Recent surveys found a record 50% of firms are cutting output due to staffing problems, and it’s costing the economy as much as $85 billion per year.

“More and more companies are cutting back on their business because there just aren’t enough workers,” said Stefan Sauer, a labor market expert at the Ifo Institute in Munich. “In the medium and long term, this problem is likely to get even worse.”

A steep rise in the cost of labor may be a boon to workers, but for Europe’s biggest economy, it’s a blow to competitiveness that could hardly come at a worse time.

German manufacturers -- especially the most energy-intensive, such as makers of chemicals, glass and ceramics -- have already seen margins evaporate due to soaring costs. Some have had to shut down factories or shift production abroad.

The labor shortage is magnifying the pressure. With workers in high demand and inflation jumping to 10.9% last month -- the fastest rate since the euro was introduced more than 20 years ago -- German public sector staff are seeking a 10.5% pay boost, while metals workers are demanding an 8% raise.

Rapid wage increases could help entrench inflation, creating a headache for policy makers. The trend could push the European Central Bank to clamp down harder, even as the economic outlook is worsening.

Firms are getting creative. Some factories are installing ergonomic equipment to keep workers on physically-demanding assembly lines well into their 60s. Others are offering four-day work weeks and signing perks like skydiving excursions.

Felix Huefner, an economist at UBS Group AG in Frankfurt, expects German wages to grow 3.5% by the end of 2023.

“The high energy prices and the shortage of skilled workers are surely an obstacle for German industry going forward,” Huefner said. “Countries like France, which have better demographics, will have stronger productive capacity in the future.”

Airbus had to dial back plans to produce 720 of its best-selling A320 jets in Hamburg this year, partly due to a shortage of workers, sending its share price falling. The company, which struggled to find electricians, mechanics and staff to install other equipment in aircraft cabins, has “massively strengthened” recruiting, a spokesman said.

Meanwhile, the city of Hamburg is planning its own €400,000 ($390,000) campaign to compete for labor in Denmark and narrow an estimated shortfall of more than 20,000 skilled workers.

The auto industry is redoubling efforts to build its own workforce. BMW recently put 75,000 staff into retraining programs for new production technologies with higher levels of digitization and automation. Car-parts giant Continental AG has enrolled 10% of its workforce into its internal tech school.

M+E, the association of metal and electrical engineering firms, is driving a fleet of double-decker trucks to high schools to make direct pitches to students. Company leaders recruit potential employees on the top deck, while students experiment with equipment like miniature robots below.

“We’ve been through coronavirus, now war and then the energy crisis,” said Andreas Rade, managing director of the VDA, Germany’s biggest association of carmakers and auto-parts suppliers. “But the shortage of workers is continuously one of the most important problems.”

The problem is even more pronounced at smaller firms that form crucial links in the supply chains for Germany’s biggest producers. In Saxony, scaffolding company Gemeinhardt Geruestbau GmbH has come up with a novel way to compete for talent: a free tandem parachute jump from 15,000 feet upon signing. In August, the company took seven trainees to an airfield in Bautzen for the experience.

“It’s an expensive thing to do, but it is helping,” company chief Dirk Eckhart said in an interview.

Of the four largest European economies, Germany is facing the biggest shortage, according to European Commission surveys. The reasons for the crunch are varied, but the most significant driver is demographics.

With the baby-boomer generation starting to retire, there aren’t enough younger people to fill the ranks. The German employment agency puts the shortfall at 360,000 to 380,000 per year and sees it rising to as much as 500,000 by the end of the decade.

On top of the demographic trend, Europe is still feeling the impact of the pandemic, when millions of people were furloughed and many didn’t return to their old jobs. Companies now have to “catch up on reallocating staff,” said Ulf Rinne, a researcher at the Institute of Labor Economics in Bonn.

Immigration, an important source of skilled workers, only partially recovered in 2021 after slumping during the pandemic. While an influx of Ukrainian refugees could help address some gaps, the course of the war makes it hard to predict how long they’ll stay.

A key hurdle to integrating foreigners has been the recognition of their qualifications. A rigid system has left experienced engineers from countries like Syria stuck in unskilled works. Rinne said language is another hurdle that puts Germany at a disadvantage to the US and other English-speaking destinations.

In a recent study, Boston Consulting Group said the cost to business in Germany from structural labor shortages is more than $80 billion annually -- among the highest of countries surveyed. At current immigration rates, Germany’s workforce will decline by 3 million by 2035 and by as much as 9 million by 2050, according to the study.

The government recently released a new strategy for developing skilled labor, including training and immigration. Chancellor Olaf Scholz’s administration is seeking changes to immigration law to attract more workers from outside the EU. Two of his ministers recently blasted previous approaches as “too sluggish, too bureaucratic, too unwelcoming.”