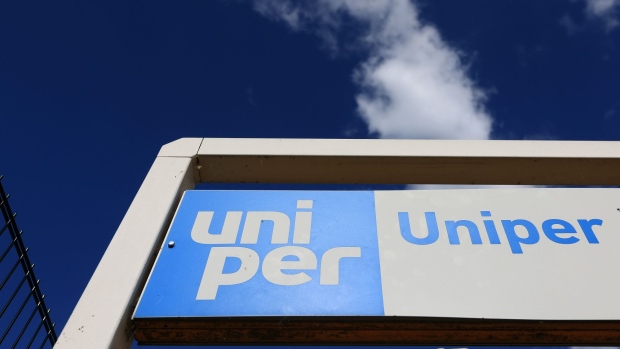 Signage for Uniper SE outside the company's Kirchmoeser natural gas power plant in Brandenburg, Germany, on Wednesday, Sept. 21, 2022. Germany will nationalize Uniper in a historic move to rescue the country's largest gas importer and avert a collapse of the energy sector in Europe's biggest economy. Photographer: Krisztian Bocsi/Bloomberg , Bloomberg

(Bloomberg) -- Germany risks being left holding 2.2 billion euros ($2.1 billion) of unsellable Russian energy assets when it takes over Uniper SE at the end of the year.

The Dusseldorf-based utility has so far failed to find a potential buyer for its Russian subsidiary Unipro since putting it up for sale in March, according to people familiar with the matter. And the odds of a deal are vanishingly small amid Europe’s energy conflict with Russia, which escalated this week after a key natural gas pipeline was damaged in what Germany called an act of sabotage.

Uniper, one of the biggest casualties of the energy crisis, has to get rid of its Russian plants before its nationalization in the country’s largest corporate bailout in at least a decade. Otherwise, the government risks becoming the owner of five coal and gas power plants that supply about 5% of Russia’s total energy needs, an untenable position for Berlin amid the raft of European and US sanctions against Moscow for its war in Ukraine.

Germany may have no choice but to give up the assets. Even if a sale were possible, President Vladimir Putin has made it almost impossible for international energy companies to secure big financial gains when they exit Russia. Early this month, Shell Plc walked away from a liquefied natural gas project with nothing, while Equinor ASA posted a $1 billion impairment on its balance sheet as a result of leaving its Russian interests.

Uniper is still trying a “controlled exit” from the Russian market, Markus Rauramo, the chief executive officer of Fortum Oyj, the German utility’s current parent, said in a call with analysts last week. He still expects to reach an agreement on Unipro’s sale, but declined to assess the likelihood of winning Russian government consent.

Unipro’s book value is between 1.7 billion euros and 2.2 billion euros, Uniper Chief Executive Officer Klaus-Dieter Maubach said last week. The Russian assets accounted for more than 15% of Uniper’s adjusted earnings in 2021. A sale is still possible until the end of this year, when the government expects the nationalization to take effect.

The German Economy Ministry declined to comment on the matter. Uniper didn’t respond to requests for comment.

Another option is to swap Unipro for ownership of a former subsidiary of Gazprom PJSC now under the control of Germany’s energy regulator, according to the people. The company, called Securing Energy for Europe GmbH, has been in German trusteeship since April, but the controlling shareholder is a Russian entity called JSC Palmary, to which Gazprom gave the subsidiary.

Such a swap wouldn’t involve money, and so probably not violate sanctions, but talks with Moscow regarding Uniper’s assets have been impossible so far, the people said. Any decision on SEFE’s future will be made by the federal government, Managing Director Egbert Laege said at a conference earlier this week.