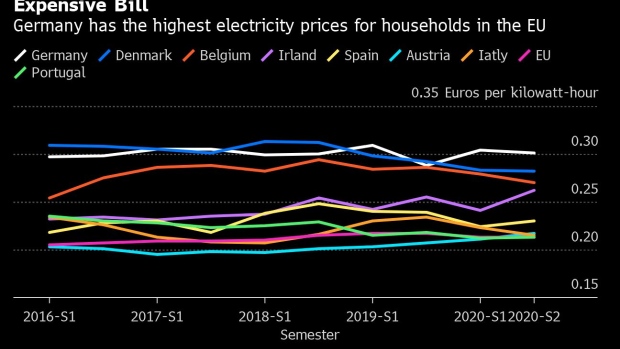 One of Germany’s biggest challenges in the fight against climate change is to keep the lights on.

In a last push to save her fading reputation as ‘The Climate Chancellor’ before stepping down after next month’s election, Angela Merkel announced Europe’s strictest emissions goals. But the green power revolution she fronted for almost two decades is running out of steam just as the electrification of the economy will increase demand.

“There is no doubt that security of supply must be high on the priority list of the next government and political action is urgent,” said Alexander Nolden, chief economist at RWE. “The new climate law is a real game changer for Germany. It means a much higher ambition and will demand much higher speed for the changes needed.”

Merkel admits her government got it wrong. Power demand will probably increase more than official forecasts by the end of the decade, she said in June. A month earlier she recognized that increasing local opposition and too much bureaucracy have curbed investments in green power.

For a long time, Germany showed the world how renewable energy could be added to make up a substantial share of the power mix. Now, the Norwegian utility Statkraft SF says it takes twice as long to build a wind park in Germany compared with the U.S. Complaints from locals, a lack of space, stricter environmental standards and a longer permitting process are just some of the reasons growth is slowing.

Take Roland Schueren. He runs 19 bakeries in western Germany and to save on power bills and help speed up the energy transition, he wants to add more solar panels for his power-hungry ovens and electric delivery vans. But the prohibitive rules are holding him back. He’s now targeting a parliamentary seat for the Green Party.

Merkel’s coalition is still ahead in the polls, but the Green Party has emerged as a real contender in the Sept. 26 election. Utilities, energy traders and analysts are pondering what policy changes might come next to help meet the new goal of a 65% reduction of carbon dioxide emissions by the end of the decade.

RWE, which operates coal plants in Germany and abroad, said Aug. 12 that it is “conceivable” the next government will revise the plan to phase out lignite, the dirtiest form of coal. Currently, the exit should be complete by 2038.

Sabrina Kernbichler, a European power analyst at S&P Global Platts, expects the phase-out to be done early next decade. That would need higher wind and solar output for 2030 and beyond, as well as expanding the grids to carry the extra power.

But the crunch could come much earlier. By 2023, the margin of supply over peak demand is expected to plunge to 3%, or two gigawatts, from 26% before the pandemic, according to BNEF.

And by 2026, output from coal plants could fall as much as 70% compared with levels prior to the Covid-19 crisis, BNEF said. At the same time, power consumption is poised to return to pre-pandemic levels next year, according to BNEF. Demand would then increase 4% by the end of the decade and as much as 25% by 2040, according to the researcher.

A supply squeeze would send power prices soaring for the many thousands of companies that make up the backbone of the economy. Wholesale rates have already jumped almost 60% this year to their highest level since 2008. That increase will feed through to the nation’s 40 million homes already paying the highest bills in the European Union, partly to fund the energy transition.

The decisions to exit nuclear, and coal were preceded by careful research, said a spokesman at energy regulator Bnetza. “The security of electricity supply is regularly examined.”

In the state of Rhineland-Palatinate, once home to two nuclear plants, the head of chemicals company Berger-Lacke GmbH rues the closures and worries about future supplies.

“Blackouts is one of the biggest risks we face,” said Thomas M. Adam. “Even a couple of days without stable power supply would be very serious.”

In the meantime, Germany may have to rely more on neighboring markets for imports. But the closure of fossil-fuel plants in other nations too means that availability could be limited during harsh winters, just when the power is needed the most, according to BNEF analyst Andreas Gandolfo. “During a collective crunch, Germany could find itself in a tight spot.”