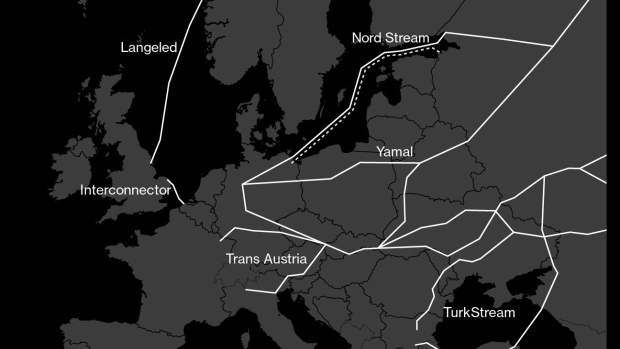 A coal and gas power plant in Grosskrotsenberg, Germany. , Bloomberg

(Bloomberg) -- If the worst-case scenario for Germany hits, BMW AG, Mercedes-Benz AG and Volkswagen AG would struggle to paint their cars and the air across the country would get dirtier.

Europe’s largest economy is bracing for the prospect that Russian natural gas gets cut off suddenly, a shock that would trigger a form of martial law for energy and affect 80 million residents and businesses from bakers to chemical producers.

Auto factories may be forced to switch to more expensive propane or butane to generate the steam and heat for paint shops. Utilities will likely generate more electricity from lignite -- an even dirtier form of coal that’s dug up by giant excavators in open-pit mines from Dusseldorf to the Polish border. Economists have forecast the damage at 220 billion euros ($230 billion), more than enough to tip the country into recession.

That possibility moved a step closer this week after Moscow curbed natural gas deliveries to Germany. While the action was a mere warning -- hitting about 3% of the country’s Russian gas imports, or roughly 1% of overall supplies -- the Kremlin showed it’s prepared to squeeze its largest customer in the back-and-forth economic retaliation over the war in Ukraine.

Chancellor Olaf Scholz’s government accused Moscow of weaponizing energy while insisting Germany can cope with the reduction. Still, the country’s vulnerability is clear, and every little turn of the tap unsettles politicians, boardrooms and markets -- European gas prices jumped 22% on Thursday on the supply jitters.

Robert Habeck, Germany’s economy minister and vice chancellor, acknowledged the country’s exposure in a speech to lawmakers hours after Moscow unveiled sanctions on 31 European entities including a unit of Gazprom PJSC that Berlin seized to secure supplies.

“Energy can be used powerfully in an economic conflict,” he said on Thursday in Berlin. “This shows that the confrontation over energy is a weapon.”

Germany’s three-stage crisis plan is currently at the first level. Habeck held off on upgrading to the next stage, saying an escalation isn’t needed based on the impact of Russia’s moves so far, which include banning Gazprom shipments to Europe via a key section of the Yamal pipeline, cutting off deliveries to Poland and Bulgaria, and a simmering dispute over payment terms with European customers.

Transport via Ukraine has also been curtailed after a key cross-border entry point was put out of action because of troop activity on the ground, according to Kyiv.

German decision makers are looking at a combination of factors that would trigger higher alert levels, including a sharp reduction in gas flows and signs that Russian President Vladimir Putin is prepared to completely shut off supplies, according to people close to the discussions.

The expectation is that the highest stage, which would involve state control over Germany’s gas distribution, would soon follow after an escalation to the second “alarm” stage, said the people, who asked not to be identified because the talks are private.

On Monday, Germany’s network regulator, known as BNetzA, will compile results of a survey in which more than 2,500 companies detailed consumption patterns and energy options. It’s part of the building blocks to potential rationing that the Bonn-based agency would implement if the government declares a national gas emergency.

The regulator has appointed 65 staffers who will work around the clock in shifts to troubleshoot if there’s a major interruption. Operating out of an annex at its headquarters near the Rhine river, the teams will be charged with making decisions that could determine the fate of some of Europe’s biggest industrial firms and hundreds of thousands of jobs.

The fuel is a crucial part of Germany’s energy mix and more difficult to replace than Russian coal and oil, which are being phased out by the end of the year. Some 15% of Germany’s electricity is generated from gas -- compared with less than 9% in 2000, as the country winds down its use of coal and nuclear power.

But more importantly, gas is critical for heating homes and for industrial processes in the chemicals, pharmaceuticals and metals sectors. It’s also widely used in the ovens of German bakers and for making glass.

“It will be very difficult,” Roland Busch, a board member with German engineering giant Siemens AG, said in a Bloomberg TV interview this week. “A gas embargo would hit the industry of Germany badly, and it would really have a huge effect, in terms of shutting down sites, on employment. And of course an impact on our economy.”

Details of a rationing plan are evolving behind closed doors as the regulator gathers information about usage and evaluates replacement options, but the broad outlines are clear: protect consumers, critical services like hospitals and systemically relevant businesses.

With the threat to its energy security looming, Germany has been using the warm spring weather to fill up storage facilities. They’re now at about 40% of capacity -- still well short of what would be needed to make it through the winter without steep cutbacks in usage.

BNetzA has spent much of April and May establishing a digital platform for what will effectively serves as its war room. Fed with company and market data, the system will allow officials to decide who gets gas and who doesn’t.

The regulator aims to have a model ready by June that provides a static snapshot of gas usage. From there, it will create a dynamic system, which would allow it to track the fallout of rationing in particular regions, industries and companies.

“If it comes to a decision in autumn, then we’re confident we’ll be able to take the least-damaging decision,” BNetzA President Klaus Mueller said on a podcast called Lage der Nation -- German for “state of the nation.”

The preparations go beyond information gathering. The agency has a stockpile of food rations for the crisis team and 5,000 liters (1,300 gallons) of diesel to power generators if rationing leads to the cutoff of commercial buildings, including its own headquarters.

The agency has already decided that the food and drug industries would be high on the priority list. That means supplies to some gas-intensive paper and glass-packaging companies would also be among those protected. For example, Mainz-based Schott AG last year produced around 90% of the glass vials used to transport Covid-19 vaccines. But other companies are in the dark, and frustration is building.

Germany’s VIK association of industrial energy users complained that BNetzA isn’t providing information on what companies need to do in the case of an emergency, giving them little opportunity to plan. Christian Seyfert, VIK’s managing director, said an uncoordinated shutdown could lead to “failures and the destruction of value chains.”

Companies across Germany are trying to get ready. Chemical giant BASF SE has determined that its main Ludwigshafen plant won’t be able to operate if its gas deliveries fall below 50% of normal levels. That could disrupt the flow of basic chemicals and send shock waves rippling beyond Europe.

Mercedes is looking at what impacts a gas shortage would have on production. A factory adjacent to its Stuttgart headquarters operates a gas-fired foundry that melts steel and magnesium for gears, crankshafts and cylinders for the S-Class luxury sedan and vehicles. While the automaker is looking at alternatives for its paint shops, it doesn’t have a substitute for the foundry.

The scale of the challenge is evident in BMW’s plans to set up the world’s first gas-free car factory in Hungary, a project that Chief Executive Officer Oliver Zipse called a “revolution” in auto production. But it won’t be ready until 2025, well after Germany aims to be independent of Russian gas.