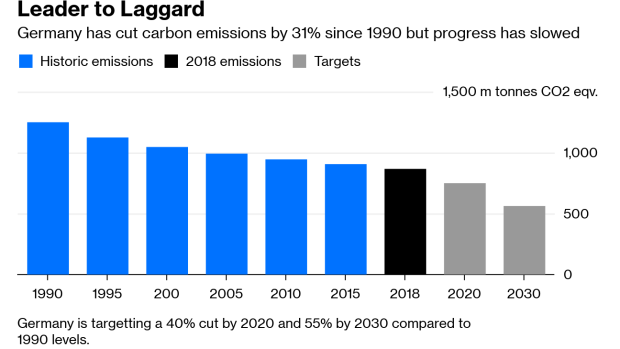 (Bloomberg Opinion) -- Herbert Diess is no stranger to controversy, some of it inexcusable. With a strongly-worded critique of German climate policy, the Volkswagen AG boss has provoked yet another row. This time, though, he is spot on.

“If we’re really serious about climate protection, the nuclear power plants should run for longer,” Diess told Tagesspiegel last week when asked about chancellor Angela Merkel’s decision after the Fukushima disaster to shut down her country’s nuclear fleet by 2022. Closing Germany’s last coal-fired power plant in 2038 – as decided in January by a government-appointed commission – is “far too late,” Diess said. We “should have quit coal first and then nuclear.”

It takes some nerve for VW to lecture the German government about environmental policy. The carmaker’s cheating on diesel emissions exposed millions of city dwellers to toxic fumes. By promoting gas-guzzling sports utility vehicles instead of smaller models, VW has also made the carbon pollution problem worse. Its cars and trucks are responsible for a staggering 2% of the world’s total carbon dioxide emissions, the company concedes.

A belated convert to electric vehicles, VW now plans to launch 70 of these models in the 10 ten years so that e-cars comprise at least 40 percent of its sales. These huge investments won’t benefit the climate much if drivers in Germany or elsewhere recharge their vehicles using electricity generated by coal power.

Yet that seems likely to happen. With only seven nuclear reactors still operating in Germany, down from 17 in 2011, atomic power there seems to be in terminal decline. While renewable energy (helped by vast state subsidies) has taken up the carbon-containing slack, solar and wind installations have slowed lately because of regulatory changes and local opposition. Coal and lignite still make up a frightening 35% of Germany’s electricity mix. Hence the country is a long way from reaching its climate goals, something that’s been noted by France’s president Emmanuel Macron as he ponders how quickly to mothball his own country’s reactors.

Germany’s nuclear shutdowns might please the electorate but they’re boneheaded from a climate perspective. If advanced economies continue to turn their backs on atomic power and partly fill the gap with fossil fuels, they risk billions of tonnes of additional carbon dioxide emissions, the International Energy Agency warned last week. Nuclear provides about 10 percent of global electricity generation, but the IEA worries that two-thirds of that could be lost by 2040 as reactors age and wholesale electricity prices fall.

The agency wants instead to keep existing nuclear plants operating for as long as possible and it says the capital investments required to achieve that can be competitive when compared to other new clean energy sources. Electricity markets would, however, need to be redesigned to recognize nuclear’s contribution to environmental and energy security. The UN Intergovernmental Panel on Climate Change also seems to be coming around to the idea of a role for nuclear.

Echoing Diess, Wolfgang Reitzle, the chairman of car parts supplier Continental AG, has spoken out in favor of extending the lifespan of Germany’s nuclear plants. But their views aren’t widely shared at home. Fastening products billionaire Reinhold Wuerth told Bild on Tuesday that the speed of the nuclear exit was “a mistake” and a comeback of nuclear should be “an option.”

Germany’s anti-nuclear movement dates back decades and public opposition increased after the Chernobyl disaster, the horrors of which HBO has recently revisited. Car bumper stickers that declare “Nuclear power, no thanks!” are still a common sight in Berlin’s otherwise climate-friendly hipster neighborhoods. When a YouTube rant criticizing Merkel’s Christian Democrats went viral recently, the party tried to push back by highlighting its role in closing the country’s atomic plants.

In theory, it’s not too late for Germany to change its mind on nuclear power, but Diess must know the chances are slim. The coalition government is fragile and the political desire to revisit such an emotionally charged topic must be verging on zero. His decision to speak out anyway is admirable.