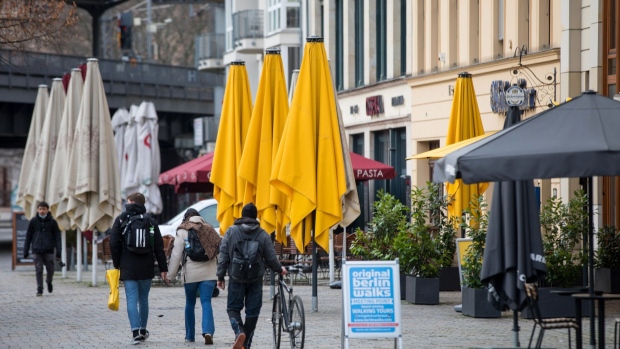 An empty restaurant terrace in central Berlin, Germany, on Friday, Jan. 7, 2022. Germany tightened restrictions on access to restaurants and cafes and vowed to accelerate vaccinations in an effort to keep the rapidly spreading omicron strain of the coronavirus in check. , Bloomberg

(Bloomberg) -- Germany will likely keep its current pandemic measures in place, the country’s regional leaders said ahead of a meeting Monday with Chancellor Olaf Scholz to discuss the situation.

“Tightening of the corona measures is not on the horizon and that is good news for the current state of affairs,” Lower Saxony premier Stephan Weil told the RND media group before the summit. North Rhine-Westphalia’s regional leader Hendrik Wuest also said relaxing current measures isn’t on the table.

“A signal for large-scale, blanket relaxations would be too early at the moment,” Wuest told Tagesspiegel. “Hospital staff are completely exhausted.”

Germany reported 85,440 new Covid cases on Sunday with the 7-day incidence rate hitting 806.8 cases per 100,000 inhabitants for the first time as the omicron variant spreads rapidly in Europe’s biggest economy.

Health Minister Karl Lauterbach predicted last week that infections won’t peak until around mid-February. At that point, daily new cases will likely be in the several hundreds of thousands, mirroring the surge in countries like France and Italy, he warned.

At the same time, there are signs that the strain is less deadly than other variants, and Germany’s vaccination campaign, though relatively sluggish, has also helped limit pressure on intensive-care units.

As of Saturday, at least 73.3% of citizens were fully inoculated with two shots and one half had received a booster vaccine, according to data from the RKI public-health institute.

Germany has tightened restrictions on access to restaurants, cafes and bars and sharpened curbs on social contact, but has so far refrained from imposing sweeping lockdown measures again like shuttering businesses and schools.