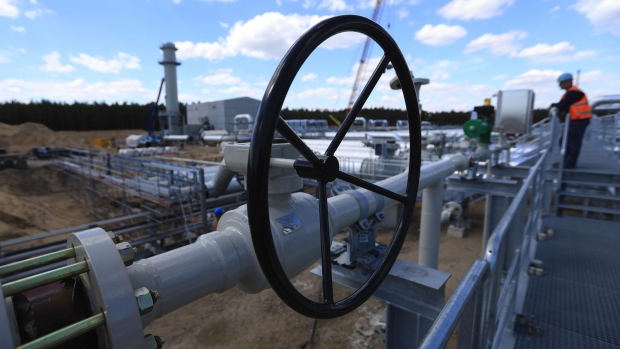 A gauge wheel sits on pipework on the European Gas Pipeline Link (EUGAL) Radeland 2 compressor station construction site, operated by Gascade GmbH, to accommodate downstream gas flows from the Nord Stream 2 project, in Radeland, Germany, on Tuesday, June 30, 2020. Germany is preparing to strike back against the U.S. if President Donald Trump follows through on his threat to kill off the Nord Stream 2 gas pipeline with additional sanctions. , Bloomberg

(Bloomberg) -- The German government opposes the European Union commission’s view of nuclear power as a sustainable source of energy and only supports gas as a bridge solution on a path to green energy, according to a letter sent by the federal government to Brussels late Friday.

“The longer nuclear power plants run, the bigger the nuclear waste problem becomes,” according to the letter, which was posted on the Economy Ministry’s website on Saturday. “In the view of the German government, nuclear energy is not sustainable.”

Gas can’t be regarded as a sustainable source of energy in the long term, the government wrote, but rather as a temporary solution to speed up transition to green energy.

“Gas-fired power plants can facilitate the rapid transition to renewable energies and the reduction of emissions in the energy sector as a whole, complement rather than displace renewables,” it says.

Europe faces mounting opposition to its proposed addition of gas and nuclear power to its green rulebook, as investors, civil society and some member states voice their dismay at the process. The EU Commission says the adjustment is necessary to wean some countries off coal and ease the transition to renewable energy forms.