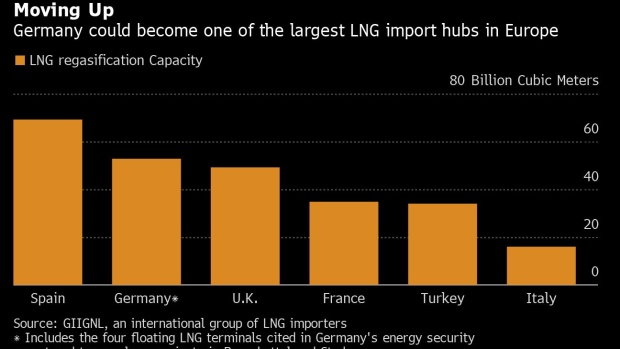 (Bloomberg) -- Germany is set to become a liquefied natural gas powerhouse within a year as it fast-tracks new import terminals to slash its dependence on Russian fuel.

The government will this week announce legislation to cut the approval process for such facilities to a 10th of the usual timeframe. It plans four floating terminals, allowing it to replace at least 70% of Russian gas imports and marking a significant u-turn in energy policy after years of resisting costlier U.S. LNG.

“We have a good chance of doing what is actually impossible in Germany -- building an LNG terminal within about 10 months and connecting it to the German gas supply,” Economy Minister Robert Habeck said in the port town of Wilhelmshaven. “This is not only German self-interest, but we are creating an infrastructure that represents security for Europe.”

European Union gas importers are racing to secure alternative shipments as they break ties with Vladimir Putin’s regime amid the war in Ukraine. For Germany, which got more than half its supply from Russia last year, deliveries into the four planned terminals would cover about a third of its annual consumption -- while boosting the EU’s total import capacity by a fifth.

“The German government has been able to make quick changes in its energy plans in order to respond to the risk of not having enough gas,” said Jorg Bergmann, chief executive officer of Open Grid Europe, the country’s largest gas network operator. “Like it has never done before, Germany is accelerating projects. We are being able to build up infrastructure in record time.”

Germany has long snubbed American LNG -- touted as “freedom gas” by the Trump administration -- miring past efforts to build terminals in lengthy bureaucracy. Its buyers have favored cheaper pipeline gas, while the government has been concerned that bringing in U.S. cargoes -- the product of fracking -- might harm its environmental credentials.

Russia’s invasion of Ukraine has caused a dramatic change of stance. The new law -- which could be presented to cabinet for approval Tuesday or Wednesday -- would do away with certain environmental checks, among other measures to accelerate construction, an official said on condition of anonymity.

With fewer hurdles to clear, the four planned floating terminals, which would normally take years to build, could all be installed by next spring, Habeck said.

Germany last week signed contracts to hire the terminals in partnership with utilities RWE AG and Uniper SE. Such facilities are faster and cheaper to bring into operation than those on land, requiring only the charter of an existing vessel, modifications to infrastructure on and offshore, and a linkup to the country’s pipeline network.

The floating terminals -- plus two to be built on land -- would put the country ahead of the U.K. in LNG import capacity, and behind only Spain in the EU. Several more onshore terminals are in the early planning stages. They all feed into Germany’s goal to reduce the share of Russian gas it imports to 10% by mid-2024, from 35% currently and more than 50% before the invasion.

“Today, more than ever, we have to base our energy supply on more robust pillars,” Habeck said. “Supply security can only be guaranteed in the long term if we think about this alongside the development of infrastructure for LNG.”