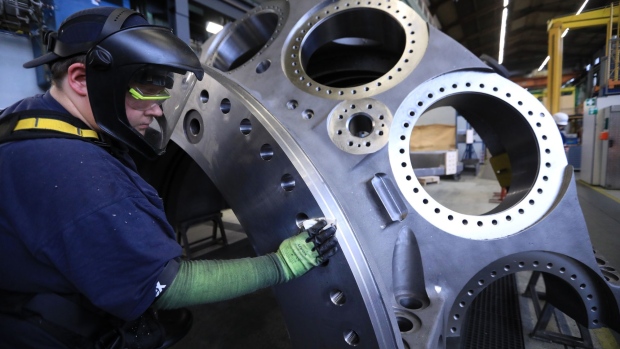 A worker cleans and checks the casing of a SGT5-4000F gas turbine inside a Siemens AG gas turbine factory in Berlin, Germany, on Wednesday, Dec. 4, 2019. Siemens AG aims to shed about 75% of its struggling power and gas unit in one of the most radical moves to date by Chief Executive Officer Joe Kaeser to untangle the sprawling conglomerate and try to boost its valuation. Photographer: Krisztian Bocsi/Bloomberg , Bloomberg

(Bloomberg) -- Germany’s economy expanded at the slowest pace in six years in 2019, when manufacturing took a battering and the country was dragged to the brink of a recession.

Expansion was just 0.6% amid trade tensions and a broader slowdown in demand that added to fundamental structural challenges the country is battling.

Carmakers including Volkswagen AG are facing a critical period as they push sales of electric vehicles, while manufacturers such as Siemens AG are under pressure to adapt to climate change. Geopolitical uncertainty in the Middle East and continued risk of a disruptive Brexit will also weigh on sentiment and momentum.

That means while 2019 is a year Germany will want to forget, the outlook for 2020 is barely any better. Economists see growth accelerating to only 0.7% this year. The U.S., by comparison, is forecast to expand more than twice that pace.

The euro was little changed against the dollar. German 10-year bonds slipped for a second day, down three basis points to -0.20%. They’ve been slowly edging back up toward positive territory recently on hopes that the economy is through the worst of the slump.

Business expectations improved at the end of last year and the Economy Ministry has pointed to a slightly better outlook for industrial activity, yet actual data are still largely disappointing. Manufacturing orders continued to decline, car production fell to its lowest in almost a quarter of a century and exports dropped.

“After a dynamic start to the year, and a decline in the second quarter, there were signs of a slight recovery in the second half,” said Albert Braakmann, head of the statistics office’s department that compiles GDP.

“Germany’s economy remained in the doldrums at the end of 2019 -- business surveys are consistent with a contraction, while industry data and factory orders also suggest momentum is extremely subdued.”

Persistent weakness has fed calls for the government to ramp up fiscal support for the economy. It’s already pledged to step up investment in infrastructure and education, and committed to spend 54 billion euros ($60 billion) fighting climate change -- more than Germany’s stimulus plan following the financial crisis. It’s said more support will be available if the economy deteriorates.

In 2019, growth was driven by consumption and construction, the statistics office said. The government posted a budget surplus of 1.5% of GDP.

Two weeks into the new year, Germany is among the first of the world’s advanced economies to publish 2019 figures. As the world’s third-largest exporter, it acts as a bellwether for the global economy, which is widely estimated to have had its worst year since the Great Recession a decade ago.

(Updates with euro in third paragraph, components in table)