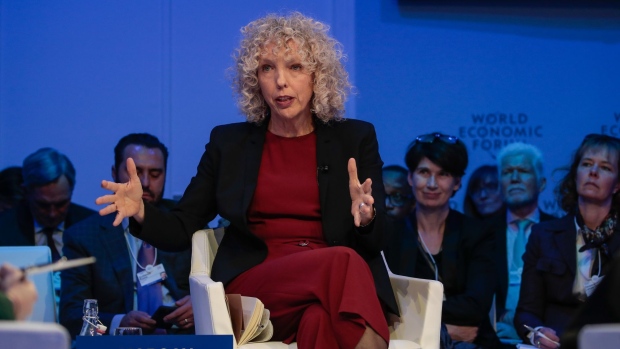 Jennifer Morgan, executive director at Greenpeace International, gestures as she speaks during a panel session on the opening day of the World Economic Forum (WEF) in Davos, Switzerland, on Tuesday, Jan. 21, 2020. World leaders, influential executives, bankers and policy makers attend the 50th annual meeting of the World Economic Forum in Davos from Jan. 21 - 24. , Bloomberg

(Bloomberg) -- As host of the Group of Seven this year, Germany’s President Olaf Scholz pushed his counterparts to agree a deal that opens the door for new gas investments. But his climate envoy, Jennifer Morgan, wasn’t impressed.

At the summit in Bavaria on Tuesday, leaders signed a communique that would allow the most developed countries to support some overseas investment in new gas projects — weakening a commitment just last month to end that financing by the end of this year. The final language was designed to secure energy supplies threatened by the Russia’s invasion of Ukraine, without compromising their climate goals.

“It’s not what I would have hoped to have seen the G-7 do,” said Morgan in an interview on Wednesday. The final agreement was full of caveats, reflecting the controversial nature of Germany’s proposal. Leaders said new gas projects should be supported only on a “temporary” basis and in a way that avoids them becoming “locked in” to the energy system.

Morgan said it remained unclear exactly what kind of gas project the world’s most powerful politicians are seeking to support: new drilling, pipelines, or power stations? While she wasn’t present at the three-day summit this week, her team helped prepare Scholz going into the negotiations.

“What to me is clear: the focus needs to be on the acceleration of renewable energy and energy efficiency,” she said. European policymakers, though, have balked at introducing more measures to curb energy use for fear of political backlash that could undermine support for Ukraine.

Morgan, 56, spent most of her career as an environmental activist, heading up Greenpeace International for the past six years. Now she finds herself on the inside of one of the governments she’s spent a lifetime criticizing. Her comments highlight the conundrum faced by Scholz’s coalition government — which includes the Green Party as a major partner— as it seeks to demonstrate global leadership on climate action, while searching for ways to secure more fossil fuels.

At the start of the year, Scholz said he wanted to use his G-7 leadership to bolster action against global warming. The government heralded Morgan’s addition to the Federal Foreign Office as a signal that Europe’s largest economy was serous about tackling climate change. But in recent weeks it has sought to revive power plants fueled by coal, the dirtiest fossil fuel, and lobbied to import more liquefied natural gas.

Germany still relies on Russia for more than a third of its gas supplies and last week elevated its threat level to the second-highest “alarm” stage. If the squeeze gets tighter, it could start rationing supplies.

While Morgan was critical of the G-7 statement’s language around gas, she said it does at least provide some clarity on the Glasgow Pact which was reached at the United Nations’ COP26 climate summit last November. That deal, signed by nearly 200 countries, promised to phase out inefficient fossil-fuel subsidies with limited exceptions to help poorer nations.

Morgan said her interpretation of the G-7 statement was that “in order for there to be any public support for gas, it has to be consistent with 1.5 degrees,” referring to the Paris Agreement’s stretch goal for limiting global warming from pre-industrial levels. “It has to not have any permanent lock-in effects. Those criteria are essential, and those are the ones that we will be using to test any investment moving forward.”

Still, large questions remain over what it means to avoid “locking in” emissions. The leaders’ statement suggested one way to do that could be to ensure any new gas infrastructure — for example LNG terminals and pipelines — can be converted to process green hydrogen in the future. The idea could work in theory, but hasn’t been done on a large scale in practice and would likely be extremely expensive and energy-intensive.

Germany has plans to turn several new LNG terminals into hydrogen hubs, which experts already consider ambitious. The bar would be much higher for developing countries, especially in Africa, which are struggling to get basic energy infrastructure built.Another approach would be to set shorter deadlines on fossil fuel contracts, according to Morgan. Robert Habeck, Germany’s climate and economy minister, and a member of the Greens party, is seeking to ensure any deals signed with other countries to import dirty energy will align with the nation’s pledge to reach net-zero emissions by 2045, she said.Morgan also stressed that green progress had been made elsewhere at the G-7 summit, including a pledge by member countries to submit more ambitious emissions-reduction targets to the United Nations at this year’s COP27 meeting in Egypt. She also cited an agreement to work harder to help poor, vulnerable nations cope with climate-induced extreme weather such as floods and hurricanes.Developing countries have for decades sought compensation for the damage caused by global warming — known as “loss and damage” in international climate negotiations. But rich economies have repeatedly avoided commitments to provide a pool of funds, despite acknowledging their earlier industrialization is responsible for the bulk of greenhouse gases in the atmosphere. Poor nations have so far failed to get the topic on the official agenda for COP27 because of push back from developed countries.

Morgan, who was born and raised in the US, said she has “no regrets” taking up the job as Germany’s climate envoy despite the challenges that have come with it. “It’s hard because the war here is incredibly real,” she said.

In Germany, energy security has become a major concern due to the country’s heavy reliance on Russian gas, which makes up a third of its current supply. That’s led to a call for Germany to reverse its ban on nuclear energy.

Morgan, who at Greenpeace lobbied against nuclear energy, said reviving that industry wasn’t the answer to Germany’s energy security issues now, not least because new power plants can take decades to build. Instead, she said that Germany should stick with its plan to bring forward its goal of 100% renewable energy to 2035 and become independent of fossil fuels, by speeding up the approval of wind turbines and creating incentives for houses to switch to heat pumps and other energy efficiency measures.“We’re much better off going the direction that we’re going,” she said.