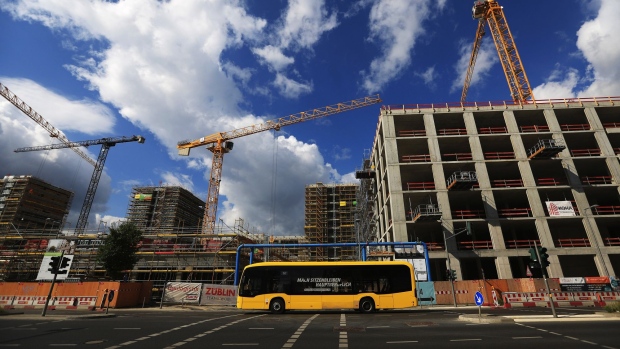 (Bloomberg) -- The squeeze on Germany’s economy eased further at the start of the year as the services sector grew for the first time since June, another sign the country may dodge a recession that many had predicted as a result of Russia’s war in Ukraine.

Private-sector activity in the country remained resilient in January, and inflationary pressures continued to cool, according to a survey of purchasing managers by S&P Global published on Tuesday.

A separate gauge of France’s economy inched lower but pointed to more resilience than initially feared and suggested the downturn “remains modest.”

The German survey “lends support to the notion that a recession in the euro zone’s largest economy is by no means a foregone conclusion,” said Phil Smith, an economist at S&P Global. “Alongside easing supply-chain strains, January’s preliminary survey also pointed to a continued slowdown in rates of inflation.”

The release adds to a string of more upbeat data on Germany’s economy as the likelihood of energy shortages dwindles and natural-gas prices fall. The Bundesbank on Monday said that output was better than expected in the fourth quarter, and Chancellor Olaf Scholz has said he’s convinced that the country will avoid a recession this year.

S&P Global economist Joe Hayes said there was also plenty of positive news in the French report, including a further easing of input price inflation and a resilient labor market.

Business confidence improved in both countries, chiming with separate surveys showing companies are becoming less pessimistic about the economic outlook.

Numbers for Japan showed the private sector returned to growth at the start of 2023, while Australia saw a fourth consecutive monthly contraction, albeit at a shallower level. Contractions are predicted for the UK and US later on Tuesday. Data for the euro area is also due.

--With assistance from Joel Rinneby and Mark Evans.