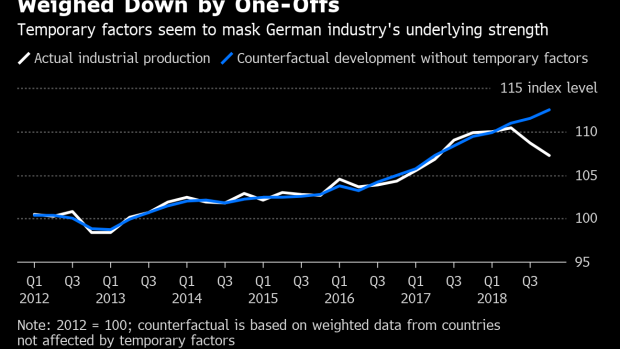 New Ford Fiesta automobiles, manufactured by Ford Motor Co., sit on a barge sailing to Vlissingen, Netherlands, on the River Rhine in Duesseldorf, Germany, on Wednesday, Feb. 13, 2019. The automaker said last month when announcing thousands of job cuts across Europe that it would merge its U.K. head office with a nearby technical center to cut costs, while warning that measures in the event of a no-deal Brexit would be significantly more dramatic. Photographer: Krisztian Bocsi/Bloomberg , Bloomberg

(Bloomberg) -- Temporary factors cost the German economy about 34 billion euros ($38 billion) in the second half of 2018, when it tipped dangerously close to a recession.

A simulation by the Kiel Institute for the World Economy looked at the state of industry while stripping out the effects from one-offs that dented growth. Without those, the economy could have expanded by about 0.5 percentage point more in each of the final two quarters of last year.

What’s unclear is how much more will be added to that bill in the coming months, with some issues, particularly in the auto industry, lingering into 2019.

A change in car-industry regulations last summer, low water levels on the Rhine river, and a curious breakdown in pharmaceutical output were seen as among the culprits behind the industrial slump. Now, global uncertainties and capacity constraints might challenge a meaningful rebound, and the institute forecasts expansion of only 1 percent in 2019.

Economists from the Bundesbank to the European Central Bank have scratched their heads over the slowdown in Germany and the euro area as they try to gauge whether growth is entering a more protracted shift.

The spell of temporary factors might not be over. Earlier this week, Germany’s economy ministry said car-model changes and strikes at suppliers emerged as new challenges, after factory orders and output took an unexpected hit in January.

But there’s also been some good news. Water levels on the Rhine have risen again after last year’s issues hurt industries from steel makers to petrochemical companies.

To contact the editors responsible for this story: Fergal O'Brien at fobrien@bloomberg.net, David Goodman