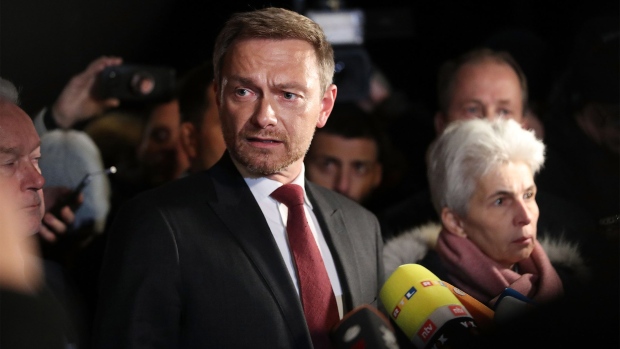 BERLIN, GERMANY - NOVEMBER 19: Christian Lindner, head of the Free Democratic Party (FDP), gives a statement to the media following troubled preliminary coalition talks at the Baden-Wuerttemberg state representation on November 19, 2017 in Berlin, Germany. The German Christian Democrats (CDU), its sister party the Bavarian Christian Democrats (CSU), the Free Democratic Party (FDP) and the Greens Party (Buendnis 90/Die Gruenen) have been slogging through three weeks of talks that have been characterized by a reluctance for compromise on certain key issues, making the outcome uncertain. (Photo by Sean Gallup/Getty Images) , Photographer: Sean Gallup/Getty Images

In comments posted on social media, Lindner took aim at Germany’s political class for “underestimating” the dangers of inflation after getting drawn into a fight with two American economists over his determination to constrain government borrowing.

“If the ECB gets caught up in the fiscal policy of heavily indebted countries, it would have little means to fight inflation,” Lindner wrote Saturday. Containing price increases is a social responsibility and letting inflation run out of control leads to poverty, he argued.

Lindner’s party, the FDP, is pushing for limits on spending in the three-way coalition talks that will determine the direction of Germany’s economic policy for the next four years. While the Social Democrats and, especially, the Greens want a more expansive fiscal policy to drive the transition to a low carbon economy, 42-year-old Lindner argues that it is risky to pile up too much public debt.

He has also said he wants control of the finance ministry as a condition for joining the next government and is aiming to seal the deal as the coalition horse-trading plays out in Berlin over the next few weeks.

Nobel laureate economist Joseph Stiglitz and Adam Tooze, a professor of history at Columbia University, warned in the weekly newspaper Zeit that Lindner’s views on public finances are “conservative cliches” that would prevent Germany getting the investment it needs. They want the Greens co-leader, Robert Habeck, to be finance minister instead.

During the first phase of the coalition talks, the three parties agreed to stick to the constitutional debt brake which limits new borrowing to 0.35% of gross domestic product. But they are at odds over how far they should go in using loopholes and off-balance-sheet structures to raise additional funds.