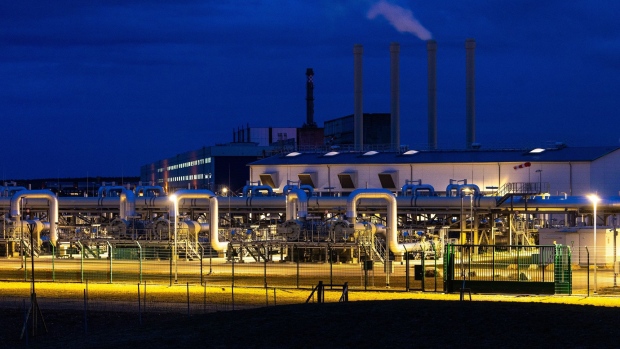 The gas receiving station of the halted Nord Stream in Lubmin, Germany in April 2022. , Bloomberg

(Bloomberg) -- Europe’s biggest buyer of Russian gas is bracing for a further drop in supply next month when a key pipeline shuts for maintenance -- and fears the link may never return to full capacity.

The Nord Stream pipe, already operating at just 40% of normal levels, will be offline for works on July 11-21, tightening a market that’s seen prices soar in recent weeks. That means less gas will be available to pump into storage, jeopardizing German efforts to replenish essential stockpiles ahead of winter.

“The interruption of Nord Stream 1 will test the market’s ability to continue storing gas” amid much lower Russian flows, said Sebastian Bleschke, head of INES, the association of German storage operators. For some storage sites, “the window of opportunity is closing.”

While the country’s gas inventories are about 58% full -- close to the seasonal average -- Economy Minister Robert Habeck said the drop in flows through Nord Stream makes it difficult to meet a November target of 90%. He indicated he’s concerned the pipeline may not return to usual capacity following maintenance.

The Nord Stream shutdown will exacerbate an energy crunch in Europe, where consumers are grappling with surging bills amid the worst cost-of-living crisis in decades. Germany, which relies on Moscow for more than a third of its gas, raised the risk level in its national emergency plan on Thursday, warning that Russia’s supply cuts risked sparking a collapse in energy markets.

Habeck on Sunday unveiled a package of measures that included incentives for industry to reduce consumption and an offer of additional credit lines by state-owned lender KfW to guarantee gas injections into storage. The government also announced plans to shut gas-fired power stations and revive coal plants.

European gas futures are trading at four times their level of last June. Prices are up 14% this week alone following the drop in flows through Nord Stream.

The rally piles more pressure on the German economy, Europe’s largest, as the government contends with accelerating inflation. The price gains also suggest a permanent loss of capacity on Nord Stream is expected, Frank van Doorn, head of trading at Vattenfall Energy Trading GmbH, said in an interview in Essen.

“It is the opinion of the market” that shipments won’t return to May levels, he said. “If we keep the status quo of flows as of today to the end of the summer we will not make the required storage levels.”

The daily fill rate at Germany’s storage facilities dropped by about half on Wednesday to the lowest since early June, according to figures from network regulator BNetzA. Two sites -- Rehden in the north and Wolfersberg in the south near Munich -- are at perilously low levels below 10%. Those sites are located in porous rock caverns, meaning they need more time to fill.

“Germany has a huge task,” Bleschke said. “It needs to rush to buy gas and fill up these sites as soon as possible.”