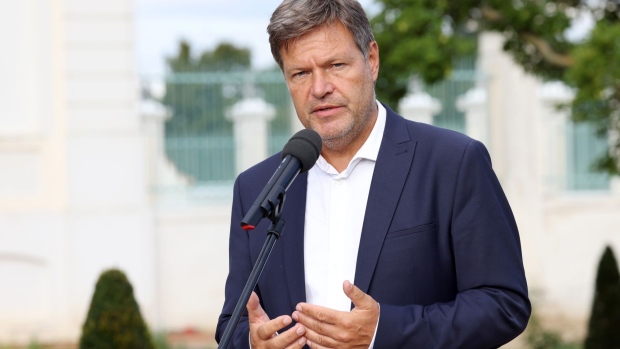 Robert Habeck, Germany's economy and climate minister, delivers a statement during the opening day of a retreat at Meseberg Castle in Meseberg, Germany, on Tuesday, Aug. 30, 2022. Habeck said compensation for gas suppliers forced to pay higher prices due to Russia squeezing deliveries will not be paid to "freeloading" companies that don't need it to stay afloat. , Bloomberg

During his first stop in the Namibian capital Windhoek, Habeck, who’ll be accompanied by a delegation of 24 German business leaders, will sign an agreement on the production of green hydrogen.

“Namibia has very great advantages in terms of location compared to Europe,” Habeck told reporters before flying out of Berlin. Namibia’s Skeleton Coast on the Atlantic Ocean is ideal for green-hydrogen production due to an abundance of sun and wind, he added.

Germany’s RWE and consortium Hyphen Hydrogen Energy recently signed a memorandum that could see RWE offtake up to 300,000 tons per year of green ammonia, a hydrogen derivative that is particularly suitable for transport by ship.

Later this week, Habeck will attend the German-African Business Summit in Johannesburg together with South African President Cyril Ramaphosa, who has come under political pressure following allegations of corruption.

Habeck’s Africa visit is part of a wider German government mission to establish new energy alliances abroad after Russia cut off its gas supplies in September. Habeck has also recently traveled to Canada, Qatar and Norway in an attempt to secure LNG resources.

“A green energy transition, security of supply and reliable value chains are also key issues in Africa,” according to Fausi Najjar at Germany Trade & Invest, a government agency that promotes German companies abroad.

“In particular, the desire for more diversified supply chains is leading to greater interest on the part of German companies in African markets,” Najjar added.

More than 400 German companies, including in the auto, medical technology and energy sectors, operate in South Africa and employ more than 65,000 people, GTAI figures show. South Africa’s share of total German foreign trade with Africa is more than 40%.

--With assistance from Ros Krasny.