Germany’s vice chancellor made a public plea to the Canadian government to release a turbine that’s caught up in sanctions against Russia and critical for gas flows to Europe.

Economy Minister Robert Habeck told Bloomberg that the turbine for the Nord Stream 1 pipeline needs to be returned before maintenance work begins on Monday. Releasing the component would remove an excuse for Russian President Vladimir Putin to keep the conduit closed.

“I’ll be the first one who will fight for a further strong EU sanction package, but strong sanctions means it must hurt and harm Russia and Putin more than it does our economy,” Habeck said in a phone interview late Wednesday. “Therefore, I ask for understanding that we have to take this turbine excuse away from Putin.”

Chancellor Olaf Scholz said the government is “doing everything to prevent an energy shortage” and wants the turbines to be delivered. “It would be good if they would be there, even though they are not necessary” for the maintenance, Scholz told ZDF television.

Germany is facing the prospect of energy rationing in the coming months, which would hit businesses and consumers and drag Europe’s largest economy into recession. Officials have warned that Russia could shut Nord Stream long term after the two-week maintenance period on Russia’s biggest gas link to Europe. Flows were already slashed by 60 per cent in June over the turbine issue, hampering Germany’s efforts to store sufficient supplies for the winter.

“We need capacities in Nord Stream 1 to fill up our storage,” said Habeck. “Filled storage capacities in Germany are not only important for the German market, but as well for the European market and for the security of supply in Europe.”

The supply squeeze has unsettled gas markets. Europe’s benchmark futures, which have doubled in value over the past month, on Thursday were headed for the longest stretch of daily gains in more than nine months.

The higher prices coupled with a supply shortage is putting companies such as Uniper SE at risk. Germany’s biggest buyer of Russian gas is in talks with the government over a bailout as it struggles to fulfill delivery contracts amid the price surge. Habeck said the situation risks creating “cascading effects” for Germany’s energy system. 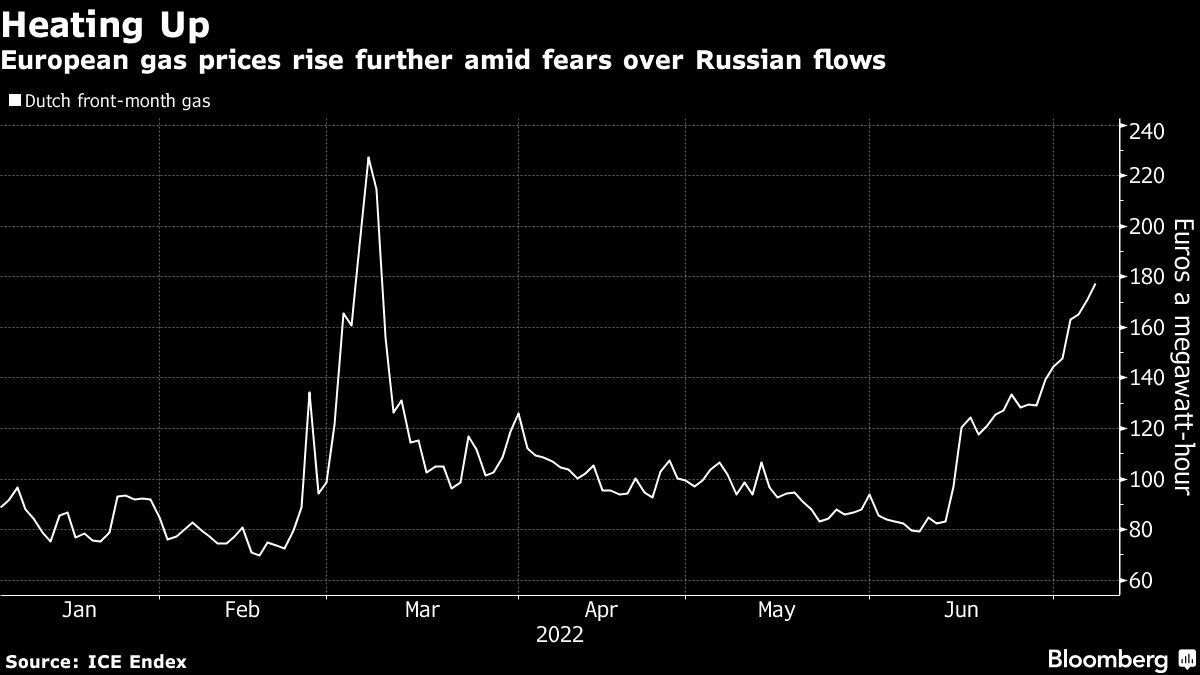 The turbine, built in Canada by Siemens Energy AG, was sent to Montreal for repairs but became stranded due to sanctions on Russia’s oil and gas industry announced by Prime Minister Justin Trudeau’s government last month. Acknowledging the legal bind created by the Canadian sanctions, the vice chancellor proposed a workaround.

“If it’s a legal question for Canada, I want to make clear that I’m not asking them to deliver it to Russia, but to bring it to Germany,” Habeck said. “It is with a heavy heart that we had to ask for this.”

The unusual public appeal came two days after Chancellor Olaf Scholz held a call with Trudeau on European energy security, and a week after the prime minister was in Germany for a Group of Seven leaders summit, which focused in large part on fallout from Putin’s invasion of Ukraine.

Canadian officials were non-committal when asked about Germany’s plea for help on the sanctioned turbine.

“We will not stop imposing severe costs on the Putin regime while their unjustifiable invasion is ongoing,” Ian Cameron, a spokesman for Natural Resources Minister Jonathan Wilkinson, said by email. “We will continue to support our European friends and allies by working to help stabilize energy markets and to develop long-term and sustainable solutions on energy supplies.”

Habeck said Putin may exploit the turbine issue to threaten Germany’s gas supply despite the fact the pipeline can still operate. He said he believes state-run Russian gas giant Gazprom PJSC, which operates the pipeline, has another working turbine it could use in the meantime.

“We shouldn’t make the mistake that we believe Putin’s propaganda,” Habeck said. Returning the equipment before the scheduled shutdown might not resolve the issue, but it would undermine one of Putin’s potential arguments for keeping the pipeline closed afterward, he added.

“If we want to take this road of excuses away from him, I’m calling on the Canadian government not to wait too long and make the decision before the maintenance period starts,” Habeck said. “Otherwise I’m quite sure that Putin will find a political problem in the pipeline.”

Europe is facing its biggest energy crisis in decades, with prime supplier Russia curbing gas shipments in retaliation over sanctions and Europe’s military support for Ukraine. Germany is rushing through legislation this week that allows it to rescue struggling firms in an effort to limit the effects of a supply crunch and surging energy costs for consumers.

Soon after the Siemens turbine was stranded last month, Gazprom slashed flows through Nord Stream. The summer is a critical time to replenish reserves needed to heat homes and run factories over the winter. The country is targeting 90 per cent capacity by Nov. 1. The level stood at 62.6 per cent on Wednesday. 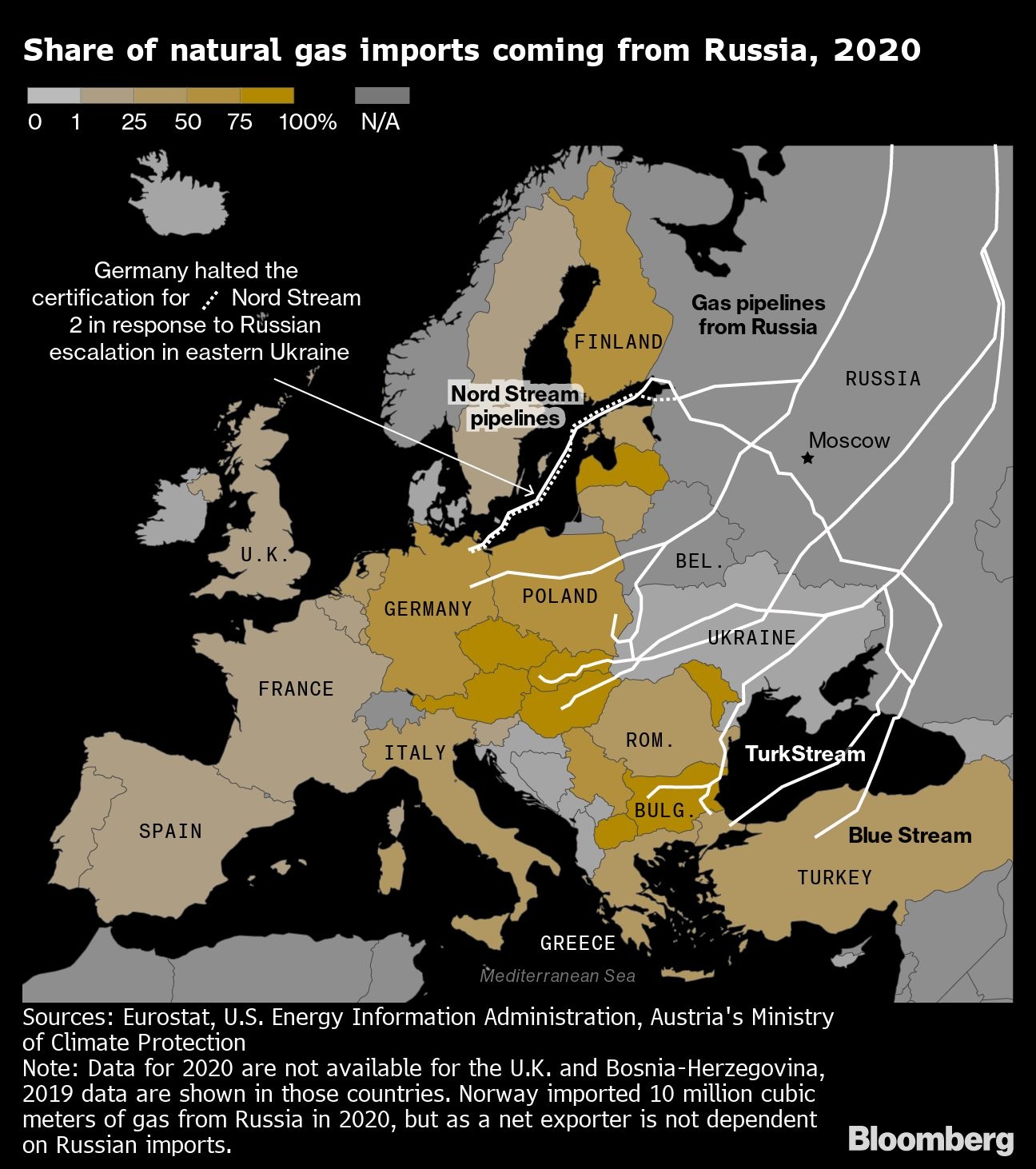 Other turbines are still in Russia, but Gazprom has said not all of them are working. The energy giant cited orders from the state safety regulator to stop using equipment that’s due for regular maintenance.

Habeck said he understands why sending the pipeline back could be politically controversial for Trudeau’s government, citing the Ukrainian diaspora in Canada -- the largest in the world outside of Russia.

“I know that they are carefully thinking through the situation and I completely understand the situation they have to balance,” he said, declining to express frustration with Canada’s delay in making a decision on the turbine.

Habeck instead cited Germany’s past policy mistakes and his personal duty as a cabinet minister in explaining his plea for Trudeau’s assistance.

“It’s part of the oath I have given to the German people” to ensure energy security, he said. “It was a grievous mistake that Germany was so dependent on one country with the energy supply, and this country is Russia.”