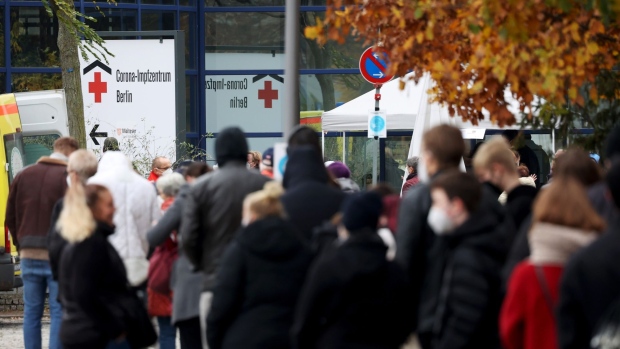 Visitors queue for Covid-19 vaccinations at the Messe Berlin exhibition center in Berlin, Germany, on Monday, Nov. 15, 2021. The three German parties negotiating a government coalition -- the Social Democrats, Free Democrats and Greens -- are planning to tighten restrictions on unvaccinated people, according to Oliver Krischer, the deputy head of the Greens caucus in German parliament. , Bloomberg

(Bloomberg) -- Germany’s incoming chancellor threw his support behind mandatory Covid-19 vaccinations as European leaders take a tougher line in a bid to check a brutal surge in infections.

During a video conference on Tuesday, Olaf Scholz told outgoing Chancellor Angela Merkel and state premiers that he would support a broad requirement to get shots, according to a person familiar with the discussions.

The move would be a departure after German leaders vowed for months that inoculations would be a personal choice and that it would be up to citizens to decide if they wanted to take up the offer. The soft tone may have contributed to the country’s relatively low vaccination rate of less than 70%.

Scholz, Merkel and the heads of Germany’s 16 states are discussing potential curbs, including restrictions on fans at soccer games and closing bars and clubs in hard-hit areas.