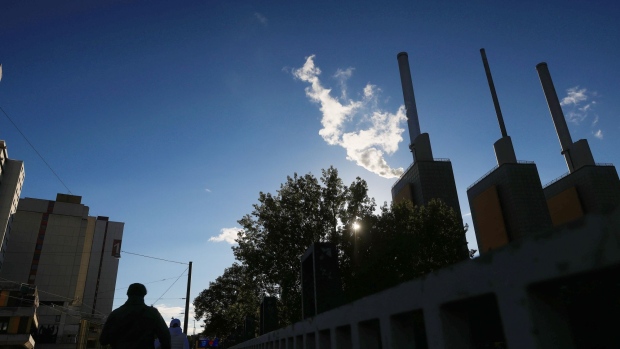 The towers of the Linden gas-fired combined heat and power plant, also known as the 'Three Warm Brothers', in Hanover, Germany, on Tuesday, Sept. 20, 2022. The German government released another 2.5 billion euros ($2.5 billion) of credit lines to secure gas supplies, as it writes off Russia as a reliable energy supplier. Photographer: Krisztian Bocsi/Bloomberg , Bloomberg

(Bloomberg) -- Germany’s network regulator warned that households and companies used too much gas over the past week as temperatures dropped and said savings of at least 20% are needed to avert a shortage of the fuel this winter.

Gas consumption was well above average, increasing by 14.5% compared with the mean for 2018-2021, the Bundesnetzagentur, publishing the weekly data for the first time, said Thursday in an emailed statement.

Klaus Mueller, the agency’s president, called the figures “very sobering,” while cautioning that they provide only a “snapshot” and that the situation can quickly change.

“Without considerable savings, also in the private sector, it will be difficult to avoid a gas shortage this winter,” he added.

Germany has been plunged into an energy crisis by the war in Ukraine after building up a heavy reliance on Russian gas imports over recent decades.

Private consumers and small businesses account for about 40% of German gas consumption and use the fuel mainly for heating. Industrial users, who account for the remaining 60%, cut consumption by 22% in August and their use was “clearly below the average” last week, the network agency said.

Mueller set out three conditions that would allow Germany to get through the coming winter in good shape, given “well-filled storage facilities.”

Projects initiated to boost gas imports, such as floating terminals for liquefied natural gas, must be implemented, gas supply in neighboring countries must also remain stable and gas must be saved, even if it gets even colder toward winter, he said, adding that “it will depend on each individual.”