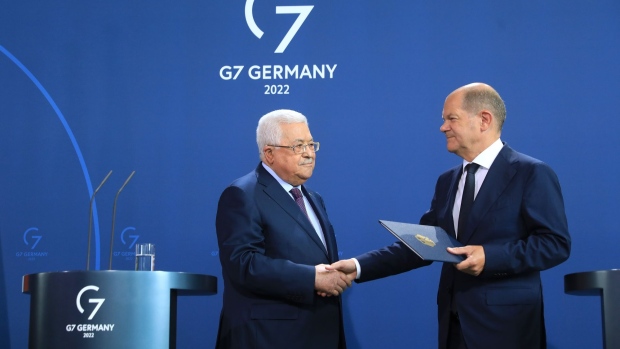 (Bloomberg) -- Olaf Scholz said he had no role in a decision not to claw back 47 million euros ($47.4 million) in tax refunds that private bank M.M. Warburg & Co. had generated from Cum-Ex deals, a controversial decision that’s been hanging over the German Chancellor for several years.

“I had no influence on the Warburg tax procedure,” Scholz said in a parliamentary hearing in Hamburg. “Such claims are wrong.”

Scholz has been under pressure over the Cum-Ex affair since it became public two years ago that he met twice in 2016 during his time as Hamburg mayor with Warburg’s then-chairman Christian Olearius. At the time, the northern German city’s finance administration was contemplating claiming back the money and Olearius was lobbying against the move. Several weeks later, Hamburg decided not to demand the funds back.

The Cum-Ex dividend tax scandal has been called the biggest tax-dodging scheme in German history and has been officially declared an illegal practice by the country’s highest court. At the height of the practice more than a decade ago, investors rapidly traded shares to earn duplicate refunds on dividend tax.

The practice, which means “With-Without” in Latin, ended in Germany in 2012 when the government revised the rules, by which time the scheme may have cost taxpayers more than 10 billion euros. German prosecutors are now investigating about 1,500 people from the financial industry.

It’s the second time Scholz is being questioned by the panel, made up of 12 members of the city parliament. A his first appearance in April 2021, he denied having influenced the decision. Then at a press conference earlier this month, Scholz chose more nuanced wording, telling reporters there was no evidence of any political influence in the matter.

“I had a lot of conversations when I was mayor,” Scholz said today of his time running the city of Hamburg, where Warburg is based. “I had a clear line with all of them: I typically don’t make any assessments of the facts, I don’t promise anything.”

Scholz claimed numerous times during questioning that he had no recollection of details about which he was quizzed, drawing frustrated rebukes from some participants on the panel.

“There are tons of clues in the files and you don’t want to remember anything? That’s simply not credible,” said Richard Seelmaecker, a lawmaker for the opposition CDU party.

The session briefly took a comical turn when Seelmaecker suggested applying the power of hypnosis to help the chancellor revive his memory. To general merriment in the room, Scholz said he’d not be inclined to consider such “hocus pocus.”

The chancellor’s latest appearance comes at a difficult time for the German chancellor, his popularity sagging after six months in office. Soaring inflation and energy prices are heaping pressure on the government to add more support to industry and quell rising discontent among voters over their surging bills.

Scholz has appeared aloof in public and has made awkward political missteps, including his failure this week to step in when Palestinian Authority President Mahmoud Abbas, standing next to Scholz during a press conference at the chancellery, made controversial comments about the Holocaust.

Warburg’s Cum-Ex deals were reviewed by a Bonn court that in 2020 convicted two London investment bankers and ordered the bank to repay 176 million euros. The verdict was backed in a landmark ruling by Germany’s top criminal court. Efforts by Warburg to topple these judgments were rejected by the nation’s constitutional court.

The city of Hamburg in 2020 sent the private lender a new tax bill, claiming 173 million euros and Warburg paid the amount while continuing to fight the orders in court.

Warburg has repeatedly said it never intended to participate in illegal transactions, mislead authorities or seek unjustified tax refunds. Olearius, who has denied the allegations, was charged with aggravated tax evasion in July.

“All witnesses made it clear that there was no political influence,” said Scholz, appearing before the panel in a dark suit and tie and delivering his statement in a stern tone. “Hamburg suffered no financial damage.”

The scandal has festered for several years but gained a renewed sense of urgency in recent weeks after it became public that prosecutors had discovered more than 200,000 euros in cash when searching a deposit box belonging to Johannes Kahrs, a former lawmaker from Scholz’s Social Democratic Party, who also began his political career in Hamburg.

Kahrs is being investigated over allegations that he may have helped Olearius get the favorable tax decision. There’s no evidence that the cash found is linked to the issue, and Kahrs himself hasn’t commented on the claims.

As part of the probe into Kahrs, Cologne prosecutors have reviewed Scholz’s email account from the time when he was mayor of Hamburg. This week, magazine Der Stern reported that the investigators consider an email by a Scholz top advisor as “suspicious”. The email dealt with the issue of which information from Scholz’s calender should be sent to the investigative committee, according to the report.

Ending his opening statement, Scholz said that he harbors a “faint hope that the assumptions and insinuations against me will finally stop.”

(Updates with details from hearing from seventh paragraph)