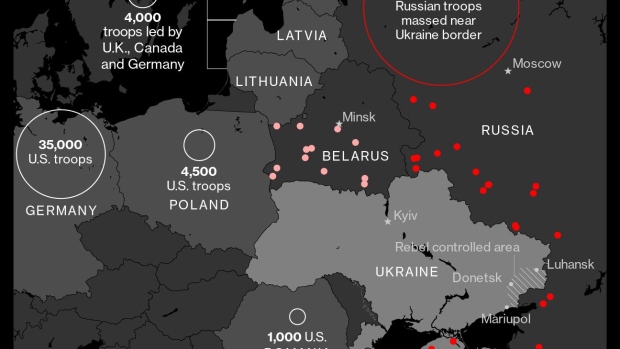 Cast as the West’s weak link in deterring Russia, Scholz’s administration has rejected sending weapons to Ukraine and is holding out on allowing Estonia to transfer Cold War-era equipment to the country, despite more than 100,000 Russian troops massed near its border. Instead, Germany has offered to finance and train people for a field hospital and send over 5,000 protective helmets.

Amid efforts to deter the Kremlin with a list of potential punitive sanctions, Germany sought to exempt the energy sector from a block on Russian bank transactions. While Scholz has vowed solidarity with the U.S. and its NATO allies, he seemed reluctant to accept the controversial Nord Stream 2 gas pipeline as a potential target.

Germany’s projection of a muddled policy on Russia stems from Scholz’s tentative position domestically. Even after a surprise election victory, he doesn’t fully control his Social Democrats. The center-left party rejected his leadership bid more than two years ago for being too moderate and then turned to him to be chancellor candidate in a campaign it expected to lose.

Now in power, Scholz has little inclination to follow the U.S.’s hard line against the Kremlin -- which denies it’s planning to invade Ukraine -- as this would undercut his party’s traditional openness to engage with Russia and potentially upset his delicate power base.

While Merkel had solid party backing and focused primarily on European and global issues during her 16 years as chancellor, Scholz’s campaign had a largely domestic agenda, with policies to raise the minimum wage, expand affordable housing and invest in a technological overhaul of German industry. In any case, it’s unrealistic to expect him to immediately step into Merkel’s shoes as a global power broker less than two months into office.

The Green party, the larger junior partner in his three-way coalition, has become frustrated with Scholz’s performance on the international stage, according to a senior party official. The chancellor is trying to emancipate himself from a pro-Russian bias in the SPD but is struggling with his own party’s conflicted stance, said the official, asking not to be identified discussing internal deliberations.

The view is very different from inside Scholz’s party. Nils Schmid, an SPD lawmaker and a foreign policy expert, said the chancellor is handling the crisis well and has left no doubt that Germany is willing to act if Russia would invade the Ukraine.

“Scholz is firmly committed to the transatlantic partnership,” Schmid said in an interview. “But he doesn’t have to jump over every hurdle put in front of him.”

The sense in Berlin is that Scholz’s main problem is largely style rather than substance. The carefully choreographed campaign image of the 63-year-old as an earnest, reliable leader ready to roll up his sleeves has reverted to drab suits and inscrutable, monotone speeches.

At a press conference with French President Emmanuel Macron in Berlin on Tuesday, Scholz was asked about Germany’s plans for military intervention. While no country has committed to sending in troops in the event of an attack, he dodged a direct response.

Instead, he promoted continued dialog with Russia, including raising the role of the OECD as a mediator. He reaffirmed that Germany would continue to support Ukraine economically and politically. “Ukraine knows that it can rely on Germany,” he said.

That was a few hours after the country’s ambassador to Germany appeared on public broadcaster ZDF to call on Europe’s largest economy to “wake up and realize that we’re facing the biggest threat since World War II.”

Optics matter in geopolitically posturing, and Scholz’s rhetoric and body language come across as hesitant, while Foreign Minister Annalena Baerbock -- the Greens’ co-leader -- seems more in tune with the West’s zeitgeist, holding crisis talks in Washington and competently staring down Russia’s Sergei Lavrov during a visit to Moscow last week.

But there’s no sense of panic coming from Scholz or his inner circle. The goal of the strategy is to strike a balance by coming up with sanctions threats that are effective but don’t escalate the conflict and close the door to Russia, a person familiar with Scholz’s thinking said, asking not to be identified.

There’s also a different approach. While the U.S. wants to present Russian President Vladimir Putin with a clear deterrent, Germany views it better to keep its cards closer to its chest, according to people familiar with the discussions.

Scholz will have a chance to make his case at a Feb. 7 meeting with Biden in Washington, according to a report in the Bild newspaper.

While Scholz was Merkel’s finance minister and vice chancellor during her final term, he lacks her track record, so doubts are inevitable. Macron even seemed to seek to deflect criticism of his German counterpart.

“The chancellor’s transfer of power took place at a difficult moment for all of our countries,” Macron said in Berlin alongside Scholz, referring to geopolitical tensions and the coronavirus pandemic.

There’s no real reason to doubt Germany’s conviction on the international stage, according to Reinhard Buetikofer, a Green party member of the European Parliament.

He noted that Merkel rallied allies to retaliate against Russia after its invasion of Crimea, despite doubts in the U.S. and elsewhere that Germany would ever agree to economic sanctions. He says Scholz’s administration will have the same resolve.