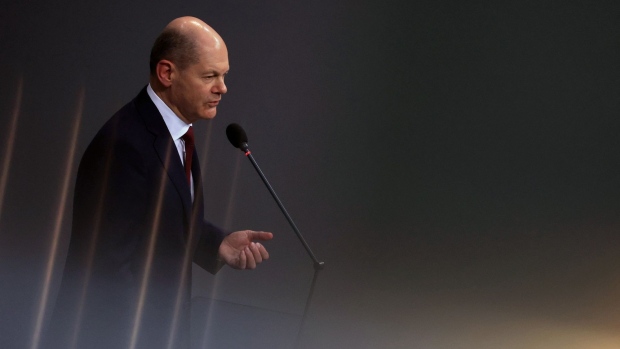 Olaf Scholz, Germany's chancellor, speaks in the Bundestag in Berlin, Germany, on Wednesday, Jan. 12, 2022. Scholz issued a strong appeal for Germans to get vaccinated against Covid-19, saying failing to do so puts others at risk as the nation grapples with the fast-spreading omicron variant. Photographer: Krisztian Bocsi/Bloomberg , Bloomberg

(Bloomberg) -- German Chancellor Olaf Scholz said possible sanctions against Russia should be “prudent” if it invades Ukraine because there will be consequences for the penalizers, too.

“Prudence dictates that we choose measures that will have the greatest effect on the one who violates the principles we have established together,” he was cited as saying in an interview with Sueddeutsche Zeitung newspaper, in its pre-publication for Monday. “No one should harbor the illusion that there is any step that has no consequences for us.”

U.S. and European concerns about the risk of a Russian invasion of Ukraine are growing as diplomatic efforts to broker a solution to the worst security crisis since the Cold War make little apparent headway. Last week Scholz urged Russia to defuse the Ukraine conflict, but didn’t outline what sanctions any aggression would entail. He didn’t go into detail this time, either, but said no hostile move would go unanswered.

Russia, which has massed up to 100,000 troops on the border with Ukraine, is keeping the U.S. and its allies guessing about its intentions though it denies it has any current plans to invade its neighbor further. It already annexed Crimea in 2014 and backs separatists in eastern Ukraine.

Scholz said Europe and U.S. were coordinating their response to possible Russia aggression and were ready to act.

“Among our allies, we agree on what possible measures look like,” he said. “That’s good. We have to be able to act in case of an eventuality. And we will be.”