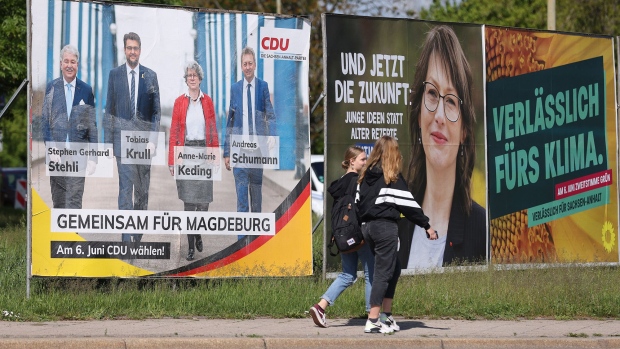 People walk past election campaign posters of the German Christian Democrats (CDU), the German Social Democrats (SPD) and the German Greens on May 28, 2021 in Magdeburg, Germany. , Photographer: Sean Gallup/Getty Images

After 16 years under the leadership of Angela Merkel, Germany votes for a new chancellor at the end of September. The post-Covid economic recovery and immigration are all on the ballot. But there’s no mistaking this election as a climate vote.

Case in point is the dramatic rise of the Green Party, up from 8% in the polls three years ago, to contend for the chancellorship under the leadership of 40-year-old, London School of Economics-trained Annalena Baerbock. The Greens have been in government before, but never standing the chancellor. For climate watchers, such a win would send significant signals well beyond German borders.

With climate ranking unusually high among domestic political considerations, I asked German energy economist Claudia Kemfert for help making sense of it all. Kemfert is a prominent figure in the nation’s debates over climate policy, and even though we’re both native German speakers she preferred to converse in English—“just simpler that way,” she said—only to switch for the occasional idiom that has no equivalent.

Kemfert threw her hands in the air when asked what will happen in September: “Who knows, it’s campaign silly season.” Or in a German phrase, loosely translated: “Every day, there’s a new sow being driven through town.” There’s always some scandal of the moment that captures the news cycle. The day we spoke, it was accusations that Baerbock was somehow associating herself with slave masters, invoking vivid images of Nazi ideology and talk of an Aryan “master race,” because she had earned a masters degree from LSE.

To Kemfert, Germany’s climate approach is largely a question of speed toward decarbonization and the finer details of who pays for what, rather than the U.S.-style debate on whether climate change is real. Merkel’s successor at the helm of the conservatives, Armin Laschet, “will continue the energy transition,” Kemfert said. It would not be as ambitious as under a Green chancellor, but Germany’s parliamentary system forces a coalition government, making it all but certain that post-election climate policies would be a mix of party positions.

The small neoliberal Free Democratic Party, for example, will not be in a position to claim the chancellorship. But some of their positions may well be reflected in the eventual government, should they be asked to help form a governing coalition. In line with its libertarian leanings, the party is against mandating solar panels on new buildings while focusing on the role of technologies such as synthetic fuels.

This focus on research and development into new technologies, rather than the deployment of existing ones, is somewhat similar to elements of the Republication Party in the U.S. who claim to want to reduce carbon emissions in the future. But it would only delay the inevitable.

In Germany, unlike the U.S., any delay would need to fit under a national carbon-reduction law. “The law is the law,” says Kemfert, pointing to a German high court ruling in April demanding the government speed up its decarbonization plans. The court was enforcing compliance with Germany’s 2019 Federal Climate Change Act.

Amazingly, Merkel’s government reacted almost immediately by increasing 2030 emissions targets to 65% below 1990 levels, up from 55% before the ruling. The government also pulled forward its net-zero emissions target by five years to 2045.

Under Merkel’s leadership, Germany has undergone one of the more significant energy transformations. A country dominated for decades by coal energy now gets around half of its electricity from carbon-free sources. Among large developed economies, only the U.K. has achieved a faster coal exit—although the British switch embraced natural gas. Germany made a deliberate push for renewable energy, supported by ambitious policies such as feed-in-tariffs, guaranteeing favorable long-term contracts to wind, solar photovoltaics and other renewable producers.

Not all is rosy in Germany. Kemfert points out how much of her country’s decarbonization strategy so far has been focused on transforming the power sector. That alone cannot accomplish Germany’s goals.

Next up are transport and home heating, backed by carbon prices slated to increase from the current 25 euros ($30) per ton of CO₂ to between 55 euros and 65 euros per ton within five years. For transport, 65 euros would translate to around $0.75 per gallon. That generates predictable political debates in relatively car-dependent Germany. It also shows the path forward for others, including potentially the U.S.

Germany has found success with its sector-by-sector approach to climate policy, with the EU’s Emissions Trading System as an important backbone. Germany adopted targeted and highly technocratic policies at first, and now it’s early push for renewables allows for ever greater ambition.

German stoicism, including from the very top, surely helped. Chancellor Merkel was famous for her saying “Wir schaffen das!”—“We can do it!”—in the face of the 2015 refugee crisis. The same three words could be applied to the country’s approach to the energy transition. German stoicism in action.

Gernot Wagner writes the Risky Climate column for Bloomberg Green. He teaches at New York University and is a co-author of Climate Shock. Follow him on Twitter: @GernotWagner. This column does not necessarily reflect the opinion of Bloomberg LP and its owners.