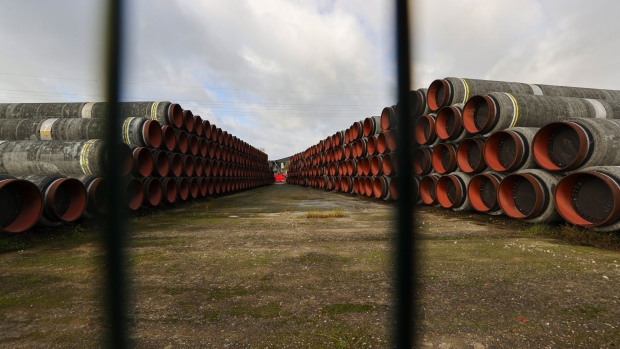 Sections of Nord Stream 2 pipes at the Baltic port of Mukran on the island of Ruegen in Sassnitz, Germany, on Wednesday, Nov. 4, 2020. Chancellor Angela Merkel’s district on the Baltic coast was the site of the last major Soviet military project in communist East Germany and is now at the center of a deepening rift between Cold War allies. Photograph: Alex Kraus/Bloomberg , Bloomberg

The regulator, also known as Bundesnetzagentur, halted the certification process in mid-November and asked the Swiss-based operator of the pipeline -- which is owned by Russia’s Gazprom PJSC -- to set up a German subsidiary to comply with European regulations.

The agency will resume the certification as soon as the necessary criteria are met, its president, Jochen Homann, said Thursday at a news conference. “A decision won’t be made in the first half of 2022,” he said.

The German regulator is still waiting for project operator Nord Stream 2 AG to submit documentation, Homann said, adding that “this is not in our hands.” In an emailed response, the company declined to specify “details of the procedure, its possible duration and impacts on the timing of the start of the pipeline operations.”

The move confirms what the market had anticipated. European benchmark gas prices briefly jumped amid concerns that pipeline may only start operating once stockpiling for next winter is well under way. The continent is suffering from the worst supply crunch in decades, with gas inventories abnormally low and futures prices soaring to record levels.

Once the German regulator resumes the certification process, it has some two months to reach a preliminary decision. It then has to submit the draft conclusion to the EU Commission, which will have another two to four months to express its own opinion.

The German agency then has a further two months to make a final decision. Those are the maximum timeframes under European law, and the statement from Germany indicates the process may take the whole time allotted.

Nord Stream 2, a twin gas link across the Baltic Sea, is set to carry as much as 55 billion cubic meters per year from Russia to Germany. The project was initially expected to start operations by the end of 2019, but it has faced multiple hurdles, including opposition in Europe and from the U.S. Construction of the pipeline was completed in September, despite U.S. sanctions.

What Nord Stream 2 Needs Before Gas Can Start Flowing: QuickTake

Germany and the U.S. have also indicated the future of Nord Stream 2 could be at risk due to the possibility of conflict, as Russia escalates its troop presence near the border with Ukraine.

The pipeline was set to be among the issues raised at a meeting of EU leaders in Brussels Thursday amid the growing military threat. Latvia Prime Minister Arturs Karins was among those to say that sanctions for the gas link should be on the table ahead of the summit.