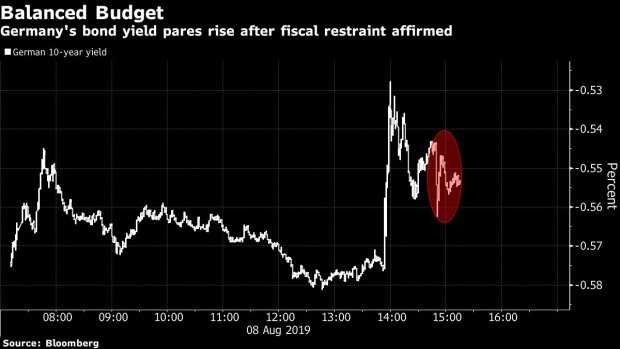 EDITORS NOTE: Multiple exposures were combined in camera to produce this image. An image of clouds at sunset overlays the skyscraper skyline of the financial district in Frankfurt, Germany, on Monday, July 1, 2019. Following the collapse of merger talks between Deutsche Bank and Commerzbank, German Finance Minister Olaf Scholz changed his message from supporting a national champion to backing a cross-border merger. Photographer: Alex Kraus/Bloomberg , Bloomberg

(Bloomberg) -- Germany’s finance ministry said there has been no government decision to abandon its policy of running a balanced budget.

The comment from a spokesman at the German finance ministry followed a report by Reuters news agency that the government is considering issuing new debt to fund a climate protection package. Reuters cited an unidentified senior government official.

The finance ministry earlier said that the existing climate and energy fund has considerable scope to fight climate change. The government is scheduled to meet Sept. 20 to discuss its next measures.

German legislators came to the support of Finance Minister Olaf Scholz, saying there are no plans to ease fiscal discipline now.

There’s an agreement between the Social Democrats and Chancellor Angela Merkel’s Christian Democrats not to take on new debt, Johannes Kahrs, the SPD’s budget spokesman, told Bloomberg News. “If we use up all our fire power now then the state won’t have any resources when it really gets bad economically,” he said.

Calls to take on new debt are gaining force in advance of the planned cabinet meeting when the government is expected to agree on additional measures to help fund environmental works.

“The government will need to take on new debt if the economy slows down,” Karl Lauterbach, deputy caucus leader of the Social Democratic junior coalition partner, said in a television interview Thursday. “We need to create exemptions from the constitutional tax brake for education or new energy to increase our efforts in these areas.”

Lauterbach is campaigning to become co-chair of his party.

--With assistance from James Hirai.

To contact the reporter on this story: Birgit Jennen in Berlin at bjennen1@bloomberg.net

To contact the editors responsible for this story: Ben Sills at bsills@bloomberg.net, Raymond Colitt, Richard Bravo