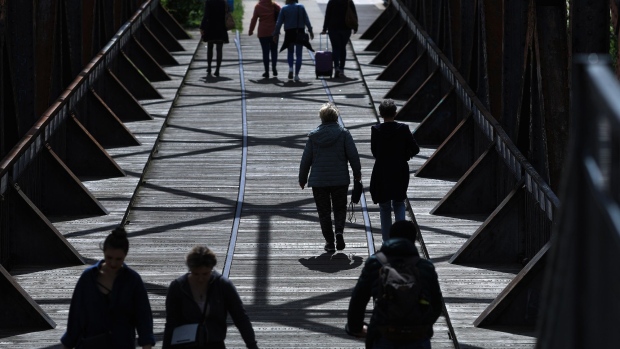 Pedestrians cross Zollbruecke bridge in Magdeburg, Germany, on Thursday, May 28, 2020. German Chancellor Angela Merkel’s government is preparing a bundle of measures to put Europe’s largest economy back on track after a nosedive triggered by the coronavirus pandemic. , Bloomberg

(Bloomberg) -- Germany’s economy is expected to expand strongly in the third quarter, but is set for a lengthy recovery process, according to a government report published on Friday.

Gross domestic product will “recover strongly” in the third quarter after an historic collapse in the months between April and June, the economy ministry said in the monthly report.

“The further economic upturn depends to a large extent on the course of the pandemic at home and abroad,” the ministry said, adding that many of the country’s trading partners are still heavily impacted by the pandemic. “ For this reason alone, after the first stronger revival in May and June, the further recovery process in the German economy will only progress slowly and take a long time to complete.”

Chancellor Angela Merkel’s administration has launched a 130-billion euro ($152 billion) stimulus plan that includes tax incentives, aid for childcare and municipal governments as well as spending on cleaner energy and digitalization, to help pull the country out of its worst recession since the end of World War II. Short-term initiatives include a temporary cut in value-added tax and a cash bonus for parents of 300 euros per child.

Overall, the measures will raise 218 billion euros in new debt this year.

Despite the recent recovery, the level of goods and services exports is only around 83% of the level it was before the start of the coronavirus crisis in February, the economy ministry said in its report.

Europe’s largest economy economy is projected to contract by more than 6% this year due to the fallout from the health crisis.

This week the nation reported the highest number of new coronavirus cases in more than three months, with daily infections staying above 1,000 for four straight days.