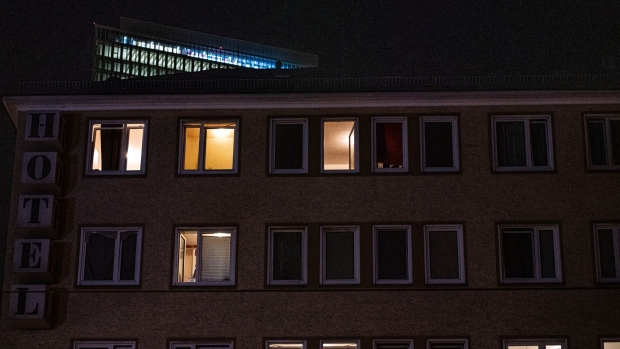 A partially lit hotel at night in Frankfurt, Germany, on Wednesday, July 27, 2022. Germany is set to bring some coal plants back online to keep the lights on this winter while higher power prices are contributing to record inflation and squeezing consumers as they struggle with higher bills. , Bloomberg

(Bloomberg) -- Germany’s government said households will face additional annual costs of about 290 euros ($296) to pay for natural gas as the burden of Russia’s squeeze on energy flows to Europe is redistributed.

From October, consumers will have to pay an extra 2.419 euro cents per kilowatt hour for natural gas, Trading Hub Europe said in a statement Monday. The blow of the temporary levy will be softened by subsidies for some households.

“The levy is a consequence of Putin’s illegal war of aggression against Ukraine and the artificial energy shortage caused by Russia,” Economy Minister Robert Habeck told reporters in Berlin. The government is working on a compensation package for consumers, because the levy presents a “challenge“ to them, Chancellor Olaf Scholz said in Oslo after a meeting with Nordic counterparts.

The levy comes as Europe shifts its focus to curbing consumption in the face of a worsening energy crisis. German power prices climbed to a record amid mounting concerns the region may struggle to generate enough electricity this winter. That has pushed up inflation rates and threatened the industry.

Habeck said the levy -- which runs through April 1, 2024 -- would cost an average single household about 97 euros a year, a couple would pay about 194 euros more and a 4-person household would bear extra costs of about 290 euros.

Utilities will be able to pass along costs for offsetting missing Russian supplies from the start of the fourth quarter. Germany had been trying to avoid making consumers pay for higher energy costs following Russia’s invasion of Ukraine. But officials fear Moscow could cut off gas flows completely, forcing them to act.

The mechanism is set to accelerate inflation in Germany, analysts at Commerzbank Research said in a report Monday. The bank estimates the inflation rate should rise well above 9% by year’s end. Consumer prices in the continent’s biggest economy jumped 8.5% from a year ago in July.

Some consumers will be eligible for a heating cost subsidy, said Habeck. German Finance Minister Christian Lindner has also said he will look at ways of exempting the levy from sales tax to partially ease the burden.

The levy follows a regulation that came into force on Aug. 9 to help energy utilities that have been forced to buy more expensive gas on the spot market. Their costs have soared after Moscow cut flows through the key Nord Stream pipeline to Europe.

Uniper, Germany’s largest Russian gas buyer, is counting on the levy to help it to shore up its finances, after the company signed a bailout from the government. Energy companies have been asking the government to raise prices for consumers to avoid a domino effect in the sector.

Uniper to Bear EU6.2B of Losses Before Passing on Higher Costs

“With the pay-as-you-go system, all gas customers can bear the additional costs caused by Putin’s war,” said Timm Kehler, chairman of natural-gas industry group Zukunft. “Gas traders are currently trying under high pressure to guarantee the supply of their customers, but without rules on price adjustments there is a risk of insolvency with serious consequences for the entire system.”

Gas importers affected by the reduction in volumes are entitled to financial compensation for part of the additional costs of replacement procurement, provided that the gas contracts were concluded before May 1, Trading Hub Europe said.

Reductions in gas consumption will help determine Europe’s ability to get through the winter. Incentives to reduce demand are expected to be at the center of the region’s agenda.

Germany’s gas storage facilities are 76% full, according to data from Federal Network Agency, known as BNetzA.