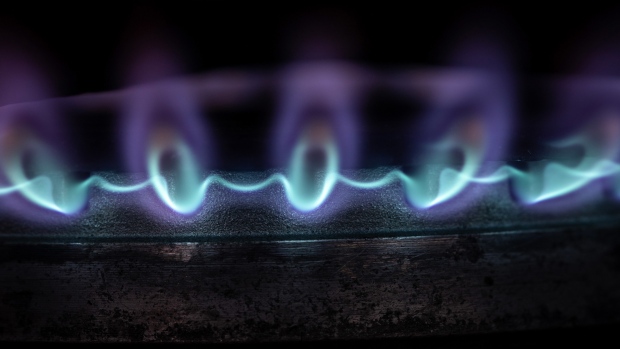 Gas burns on a domestic oven hob inside a residential apartment in Corbera De Llobregat, Spain, on Wednesday, Jan. 12, 2022. Natural gas prices in Europe jumped to the highest level in a week as fears about a possible military action in Ukraine raise concerns that Russian supplies may get even more limited during the coming winter months. Photographer: Angel Garcia/Bloomberg , Bloomberg

(Bloomberg) -- Germany is stepping up preparations for a gas emergency that would require rationing for the country’s biggest companies this winter as Russia’s squeezes flows to Europe.

In a sign of growing urgency, the regulator will next Wednesday present to lawmakers a digital security platform to identify the “non-protected” consumers that will bear the brunt of rationing. That includes Germany’s 2,500 biggest gas users, which must register on Bundesnetzagentur’s platform by the end of October.

Should a deterioration in market conditions trigger an emergency after the winter heating season starts next month, the regulator would take control of gas distribution. Klaus Mueller, head of Bundesnetzagentur, has previously said that a cold winter would probably result in “waves” of gas shortages.

“It could be dangerous” if Germany faces cold weather early in the winter, according to Andy Sommer, team leader for fundamental analysis & modeling at Swiss utility Axpo Solutions AG. That would boost demand, forcing Germany to tap storage sites and putting at risk gas supplies for the rest of the season, he said.

Gas suppliers must also provide data about their network structure as the government seeks to shield “protected” consumers, such as households, small businesses, hospitals and schools.

Germany Unveils Digital Tool That Will Ration Gas in a Crisis

To coordinate Germany’s response to the crisis, the economy ministry has also created a new “energy security and economic stabilization” department, spokesman Stephan Haufe said Friday at a regular government news conference. The department will be overseen by Philipp Steinberg, previously head of the ministry’s economic policy department.