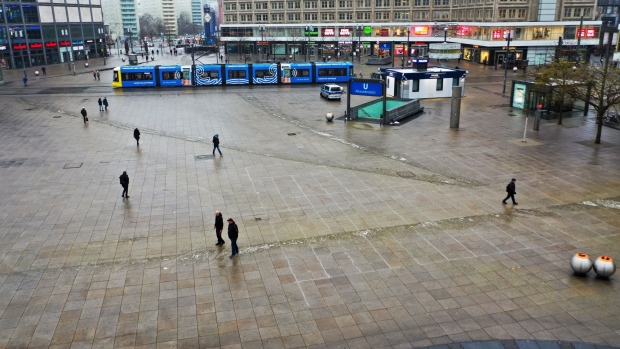 (Bloomberg) -- Germany can recover from the coronavirus crisis without resorting to another broad stimulus program like in 2020, according to Economy Minister Peter Altmaier.

“Stimulus programs in the classical sense, like the one we enacted last year, are not appropriate at the moment,” the member of Merkel’s conservative bloc said. “But there is a need to invest significantly in industries of the future” to help Germany achieve a goal of carbon neutrality by 2050, he added.

While Altmaier said support for businesses affected by coronavirus curbs will continue, his aversion to another round of stimulus sets the stage for an intense debate ahead of September elections. The Christian Democrats are wary of adding to Germany’s debt, while the Social Democrats and Greens are pushing for looser spending.

Germany’s statistics office predicted that the country’s renewed pandemic lockdown won’t have the same severe impact as restrictions earlier in 2020. It estimates output remained flat in the fourth quarter, capping a year that saw an economic contraction of 5%.

According to government projections, the economy is set for growth of 4.4% in 2021. Lockdown restrictions are likely to weigh on expansion, and the recovery will probably fall somewhat short of what was expected, Altmaier said.

“We want the German economy to return to growth this year -- perhaps a bit less than originally hoped due to the new outbreak,” he said. “But an upswing can carry with it others in Europe and worldwide, and that can contribute to a positive development in the global economy.”

Moves to scrap a levy to fund investment in former communist eastern Germany for 90% of taxpayers and extra child support will help foster growth this year, he said.

Altmaier defended the government’s generous aid programs, but said the support won’t last forever. He stressed the need to help German companies shift to cleaner energy and assist exporters with securing a competitive edge in the green transition.