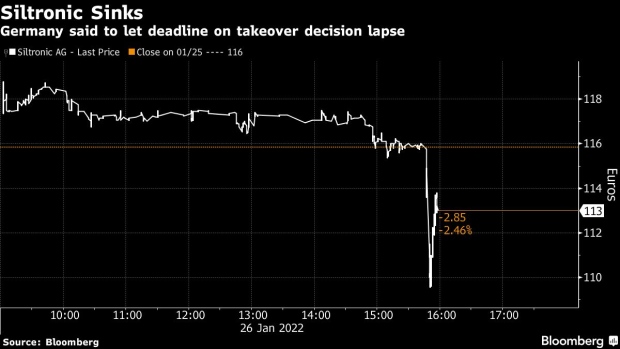 (Bloomberg) -- Germany will likely let a looming deadline for approval of GlobalWafers Co.’s $5 billion takeover of Siltronic AG lapse, according to people familiar with the matter, a move that would effectively derail the proposed deal.

The Economy Ministry has been scrutinizing the bid for the wafer maker by the Taiwanese company for more than a year, but continues to be generally skeptical, the people said. They declined to be identified because the deliberations are private.

The sale of Siltronic has been closely watched as the Monday deadline approaches.

The combination of the firms has drawn attention because wafers are the key ingredient of semiconductors, as well as because of political tensions between Europe, China and Taiwan. That’s made the deal an early test for Robert Habeck, Germany’s new economy minister.

Nvidia Corp. is preparing to abandon its purchase of British chip company Arm Ltd. from SoftBank Group Corp. after drawing backlash from regulators and making little to no progress in winning approval for the $40 billion deal, Bloomberg News reported earlier this week. During the process, Nvidia’s bid has been facing a national security review in the U.K.

Germany already tightened rules on foreign takeovers in 2020 to protect “critical infrastructure,” but there may have been additional concerns about Siltronic because of the semiconductor shortages that have disrupted industries in Germany and elsewhere.

Spokesmen for GlobalWafers and Siltronic declined to comment. German Economy Ministry spokeswoman Beate Baron said that the review is ongoing and declined to comment on the possible result at a regular government press briefing on Wednesday.

Approval from Germany is the final hurdle for the takeover after China’s market regulator last week cleared the plan with conditions.

It’s unlikely the Economy Ministry would outright oppose the Siltronic deal, two of the people said. However, no approval by the deadline would make a combination practically impossible.

The lack of a formal rejection means the government won’t say under what conditions it would approve a deal. GlobalWafers and Siltronic have already offered a range of remedies to allay possible security concerns about the deal.