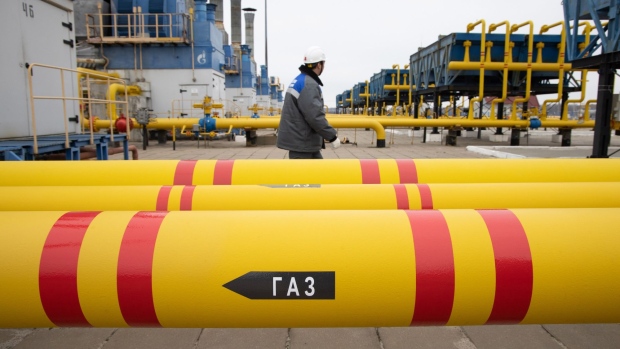 Pipes carrying gas at the Kasimovskoye underground gas storage facility, operated by Gazprom PJSC, in Kasimov, Russia, on Wednesday, Nov. 17, 2021. Russia signaled it has little appetite for increasing the natural gas it transits through other territories to Europe as the winter heating season gets underway. Photographer: Andrey Rudakov/Bloomberg , Bloomberg

(Bloomberg) -- German Economy Minister Robert Habeck will make a statement Thursday on “energy and supply security” amid expectations the government is poised to trigger the second stage of the country’s gas-emergency plan.

Habeck, who is also the vice chancellor in the ruling coalition, will speak at 10 a.m. in Berlin, the economy ministry said by email.

Habeck warned Wednesday that Europe’s biggest economy should brace for a further cut in Russian gas flows after Moscow last week slashed deliveries on its main pipeline to Europe. An official familiar with the government’s plans, who asked not to be identified, said the second phase of the three-stage crisis plan could come as early as this week.

Enacting stage two -- the “alarm” phase -- could mean a change in the law to allow energy companies to pass on cost increases to homes and businesses. It may also involve firing up more coal-fired power plants to minimize gas consumption.

Germany enacted the “early warning” phase at the end of March, when the Kremlin’s demands for payment in rubles prompted Germany to brace for a potential cutoff in supply. The highest level involves state control over distribution.

Habeck has said Russia’s move to cut gas deliveries through the Nord Stream pipeline by about 60% was politically motivated and aimed at unsettling the markets.