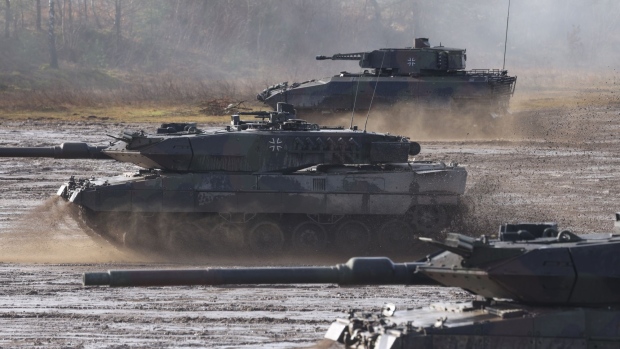 MUNSTER, GERMANY - FEBRUARY 07: Two Leopard 2 A6 heavy battle tanks and a Puma infantry fighting vehicle of the Bundeswehr's 9th Panzer Training Brigade participate in a demonstration of capabilities during a visit by Defence Minister Christine Lambrecht to the Bundeswehr Army training grounds on February 07, 2022 in Munster, Germany. Lambrecht confirmed today that Germany will additional Bundeswehr troops to Lithuania, where it leads a NATO contingent. NATO member countries have been sending troops and military hardware to NATO member countries across eastern Europe as a signal that it is taking the current Russian troop buildup on the Russian and Belarusian borders to Ukraine seriously. The buildup has caused international fears of a possible, imminent Russian invasion of Ukraine. (Photo by Sean Gallup/Getty Images) , Photographer: Sean Gallup/Getty Images Europe

(Bloomberg) -- Germany will fail to meet a NATO guideline of spending 2% of gross domestic product on its military next year and again from 2026 onwards, according to an analysis quoted in local media on Monday.

Chancellor Olaf Scholz pledged in a speech to parliament shortly after Russia invaded Ukraine at the end of February that Germany would invest “more than 2% of GDP annually” in defense, and announced the creation of a special fund worth €100 billion ($105 billion) to help achieve the goal.

However, procurement problems and entrenched bureaucracy have hampered the spending drive. Defense Minister Christine Lambrecht recently revised the target to 2% of GDP “on average in the next five years,” potentially angering Germany’s allies who have long complained the government in Berlin isn’t pulling its weight militarily.

“The 2% target is receding into the distant future despite €100 billion in special funds, and even necessary procurements in the short term are not progressing,” the Rheinische Post newspaper quoted a study by the IW economic research institute as saying.

The regular defense budget -- not including the special fund -- would have to be increased by at least 5% per year if Germany wanted to achieve the 2% target, the paper quoted the study as saying.

The Cologne-based IW institute is funded by around 110 German business and employers’ associations.