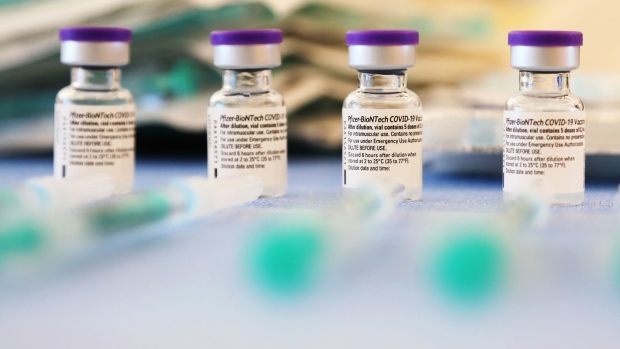 Vials of the Pfizer-BioNTech Covid-19 vaccine at a senior citizen care home in Premnitz, Germany, on Wednesday, Dec. 30, 2020. Germany’s new coronavirus deaths surpassed 1,000 for the first time since the beginning of the pandemic, just days after the country started its vaccination campaign. Photographer: Liesa Johannssen-Koppitz/Bloomberg , Bloomberg

(Bloomberg) -- Germany is poised to widen Covid-19 vaccinations to include all 12-17 year-olds, stepping up efforts to spur its flagging inoculation drive.

The move set to be agreed Monday goes beyond advice published by the government’s independent vaccine commission. The authority, known as STIKO, recommends inoculating those in that age group who have pre-existing conditions that put them at heightened risk from the coronavirus, or those who are in regular contact with people who are in particular danger.

“In other countries this is already happening and we think it’s important not to lose any time,” Bavaria Health Minister Klaus Holetschek said Monday in an interview with ARD television.

“If anyone is unsure, they should consult their doctor,” he added ahead of talks with regional counterparts and Federal Health Minister Jens Spahn. “The key thing is that we’re making an offer of vaccines to a group that is not yet protected.”

The European Medicines Agency, which monitors and supervises the safety of medicines in the European Union, has recommended giving either the Pfizer Inc./BioNTech SE or the Moderna Inc. Covid-19 shots to 12-17 year-olds.

Germany’s STIKO has been more cautious, arguing that safety studies of the vaccine for young people aren’t yet extensive enough to allow a recommendation for general use, given that most Covid cases in teens are mild.

As of Friday, 52% of the German population were fully vaccinated against Covid-19, and just under 62% had received at least one shot, according to the latest health ministry data.

The inoculation campaign has lost steam in recent weeks. In May and June, Germany was regularly vaccinating more than 1 million people per day, but the total has fallen back significantly since the start of July.