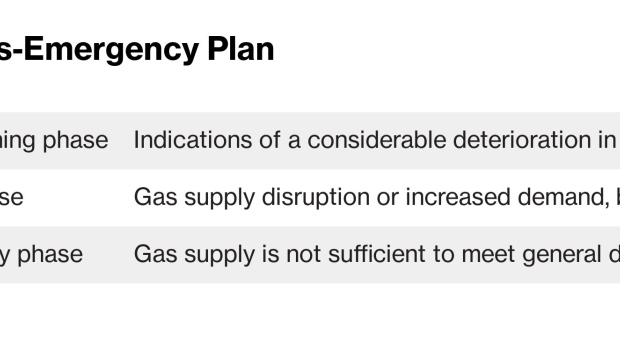 Pipework stands on the European Gas Pipeline Link (EUGAL) Radeland 2 compressor station, which accommodates downstream gas flows from the Nord Stream 2 project, in Radeland, Germany, on Tuesday, Sept. 22, 2020. Nord Stream 2, which is designed to carry as much as 55 billion cubic meters of Gazprom PJSC’s gas to the EU every year, is seen by opponents as the Kremlin tightening its energy grip on the region. Photographer: Krisztian Bocsi/Bloomberg , Bloomberg

(Bloomberg) -- German Economy Minister Robert Habeck will trigger the second stage of the country’s three-phase gas-emergency plan later on Thursday, according to a person familiar with the plan.

Habeck warned Wednesday that Europe’s biggest economy should brace for a further cut in Russian gas flows after Moscow last week slashed deliveries on its main pipeline to Europe. He is due to make a statement at 10 a.m. in Berlin.

Germany enacted the initial “early warning” phase at the end of March, when the Kremlin’s demands for payment in rubles prompted Germany to brace for a potential cutoff in supply. The third and highest level involves state control over distribution.