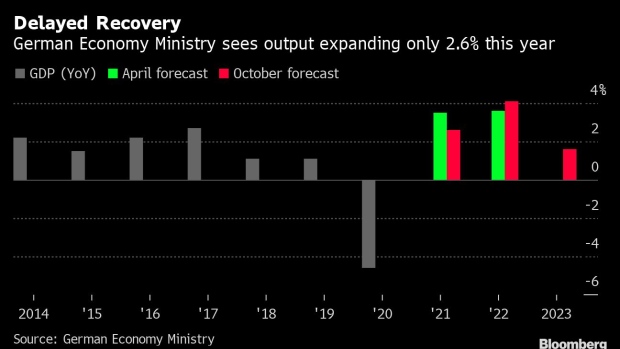 The HHLA container terminal Tollerort GmbH in the Port of Hamburg, in Hamburg, Germany, on Wednesday, Oct. 20, 2021. The expectation among businesses in Hamburg is that the next government will be tougher on China when it comes to issues such as market access and intellectual property, as well as on social and environmental compliance, said Doris Hillger, head of the foreign trade department at Hamburg Chamber of Commerce. , Bloomberg

Germany expects growth this year to be significantly weaker than predicted, before Europe’s biggest economy shakes off the lingering effects of the pandemic and a supply squeeze and expansion accelerates in 2022.

The cut in the government’s 2021 outlook to 2.6% -- compared with a prediction of 3.5% published at the end of April -- is partly down to supply bottlenecks and rising energy prices, particularly for gas, Economy Minister Peter Altmaier said Wednesday in Berlin.

Experts from his ministry raised their forecast for 2022 GDP growth to 4.1% from 3.6%, and predicted that growth will “normalize” at a rate of 1.6% in 2023. Altmaier is presenting the updated outlook at a news conference from 11 a.m. in Berlin.

“The precondition is that we stabilize international supply chains, and, for example, make sure that more of the chips are produced that are built into almost every device, especially cars,” Altmaier said earlier in an interview with ARD television.

The government’s growth forecast for this year is slightly more upbeat than joint predictions published this month by the nation’s leading research institutes, while its outlook for next year is significantly less optimistic. The institutes cut their 2021 outlook to 2.4% from 3.7% and raised their 2022 estimate to 4.8% from 3.9%.

The economy ministry’s twice-yearly forecasts help guide budget planning, and these are almost certainly the final ones to be prepared by the current government under Chancellor Angela Merkel.

Finance Minister Olaf Scholz, who led his Social Democratic party to victory in last month’s election, is aiming be confirmed as Germany’s new chancellor in early December at the head of a coalition with the Greens and the business-friendly FDP.