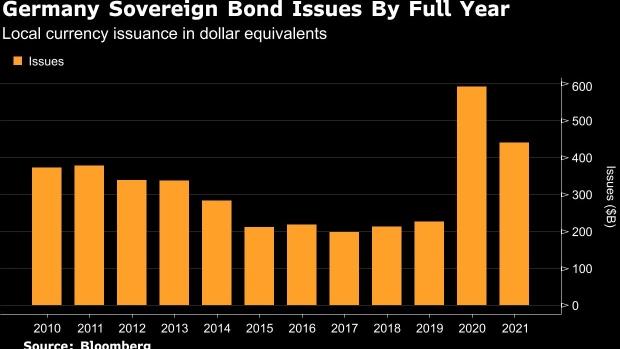 Germany cut planned debt sales in the fourth quarter by 4 billion euros ($4.7 billion), suggesting the surge in borrowing triggered by the coronavirus pandemic is receding.

The federal government will raise 1 billion euros less in 15-year bonds, and trim sales of short-term discount paper by 3 billion euros compared with a plan published at the end of last year, the Federal Finance Agency said Tuesday. That means that total debt issuance for 2021 will work out at 500 million euros more than projected, it added.

The pandemic brought years of German frugality to an abrupt end, with tens of billions distributed to offset the impact of the disease on the economy and borrowing climbing to a record in 2020.

The government plans to continue expanded borrowing in 2022. Finance Minister Olaf Scholz  -- the Social Democratic candidate to succeed Angela Merkel as chancellor after Sunday’s election -- has proposed suspending constitutional debt limits for a third straight year, before restoring them starting in 2023.

Although Merkel’s cabinet has signed off on his budget, which includes additional borrowing of almost 100 billion euros, it won’t get final approval from lawmakers until later this year. That means the plan could change as it makes its way through parliament, potentially impacting debt issuance.

According to the latest polls, Scholz is on track to lead the next administration. His SPD and their likely coalition partners the Greens have pledged to invest in a sweeping overhaul of the economy. Merkel’s conservative bloc and their candidate Armin Laschet favor a swift return to budget discipline once the coronavirus recedes.

Benchmark 10-year bund yields whipsawed amid risks from China and ahead of a Federal Reserve rate decision this week. They climbed on Tuesday a day after dropping by the most in more than two months.

The European Central Bank has indicated it will slow the pace of its pandemic bond-buying program in the final quarter of 2021. The bank’s president, Christine Lagarde, said this wasn’t a move heralding a wind-down in stimulus for the euro-region.