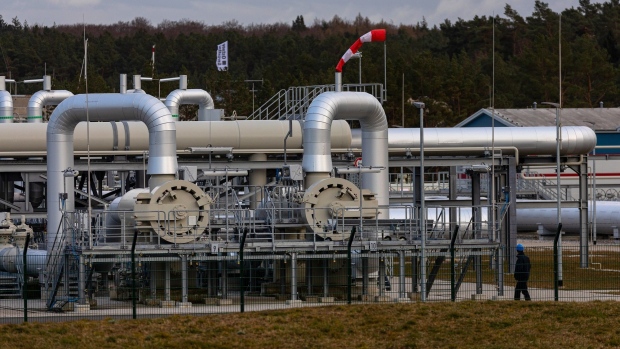 Pipework at the gas receiving station of the halted Nord Stream 2 project, on the site of a former nuclear power plant, in Lubmin, Germany, on Tuesday, April 5, 2022. Germany is preparing to take a leap into the unknown as Europe starts to get serious about weaning itself off Russian fossil fuels. , Bloomberg

(Bloomberg) -- Germany plans to encourage industry and energy providers to save natural gas by offering incentives for them to make surplus gas available to the market as the country braces for a further deterioration in energy supplies this winter.

Under the system to begin this summer, major consumers and suppliers can offer their unused gas in an auction, with winning bidders getting paid for the fuel they provide, the Economy Ministry said in a statement on Thursday. The measure, announced Sunday, was detailed Thursday as the government elevated the risk level in its national gas emergency plan to the second-highest “alarm” phase.

Germany is racing to save gas after Russia cut supplies on the key Nord Stream pipeline by more than half last week. The country aims to have storage sites 90% full by November from about 58% now, and lower flows from Russia will make it difficult for Germany to achieve its targets, the ministry said.

Rewarding gas savings was welcomed by Peter Adrian, the president at the association of German chambers of commerce and industry.

“But now you have to get started quickly,” he said. “In addition, companies should be allowed to switch from gas to heating oil or coal in the short term. So far, however, environmental regulations have stood in the way.”

Germany will also provide Trading Hub Europe with the liquidity it needs to purchase more gas in the market to fill storage sites.

“The model is intended to ensure that as many gas quantities as possible are available for any bottleneck situations in the coming winter,” the ministry said.

The heightened alert announced Thursday tightens monitoring of the market, and allow some coal-fired power plants to be reactivated. The government said it would hold off on an option of enacting legislation to allow energy companies to pass on cost increases to homes and businesses.