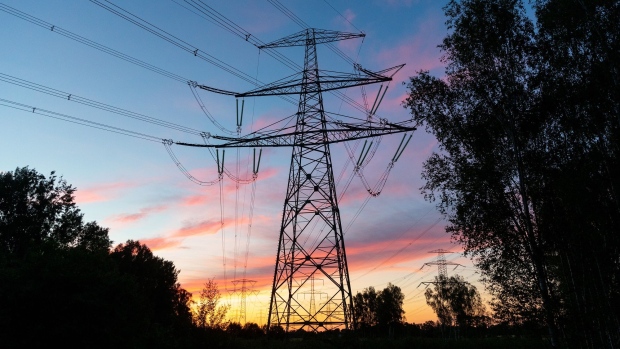 High voltage electricity power lines near the Jaenschwalde lignite coal-fired power plant in Peitz, Germany, on Tuesday, June 21, 2022. Germany is preparing to trigger the second stage of a three-stage emergency gas plan, that may also include firing up more coal plants to minimize gas consumption. , Bloomberg

(Bloomberg) -- Germany wants to make smart meters mandatory for large- and medium-sized companies so grid operators can better monitor how power is being used and when to augment supplies with electricity from renewable sources.

The proposal by the Economy Ministry also wants to make it easier to put those digital meters into households, according to a paper seen by Bloomberg News. Chancellor Olaf Scholz’s government is aiming for parliamentary approval in the first quarter of next year.

Germany has the biggest economy in Europe and is home to corporate titans such as Volkswagen AG, Deutsche Bank AG and Adidas AG. The country, which is mired in an energy crisis because of a dependency on Russian gas, is trying to transition toward clean power to wean itself off fossil fuels and to meet ambitious climate goals.

The government wants to green 80% of its power consumption by 2030, compared with 41% last year. Yet it’s been slow to install these devices because of concerns about data protection and cybersecurity.

To speed up conversions, the government now allows the installation of certified meters at small customers, even if all of its functions aren’t activated. By 2025, these will be obligatory for consumers of as much as 100,000 kilowatt-hours per year and for producers of as much as 100 kilowatts.