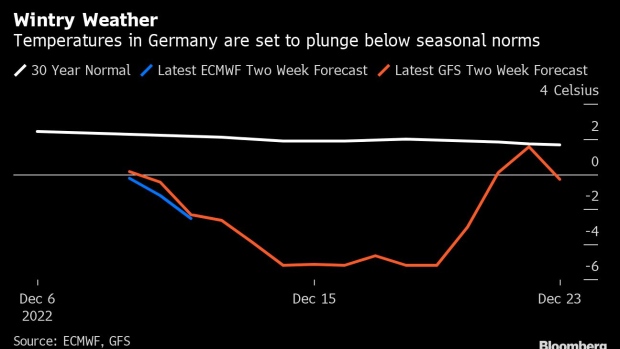 (Bloomberg) -- Germany’s network regulator warned that homes and companies need to save much more gas to avoid shortages, after cold weather sparked a demand spike in Europe’s biggest economy.

Too little is being saved and “this should not continue,” Klaus Mueller, president of the Federal Network Agency, said in a tweet on Thursday. Consumption in the week that ended Sunday was down 13% from the four-year average and 14% higher than the previous week.

That’s well short of meeting a target to cut usage by at least 20% that the regulator says is needed to offset lost Russian supply.

Curbing consumption is essential for Germany to last the winter without rationing or blackouts, though the government so far expects to have enough energy. A mild autumn helped limit demand and to fill up gas-storage sites, easing supply worries. But that could start to change if temperatures plunge for a sustained period.

Germany’s total gas consumption fell 27% in November from a year ago to 2.65 terawatt-hours per day, according to an association of German gas storage operators, known as INES. The volume is below previous forecasts and indicates consumers are trying to save gas, even on cold days.

“If we manage to continue the energy saving as it is currently done, then we will have enough gas for the winter,” Economy Minister Robert Habeck said Thursday during a trip to South Africa.

Still, temperatures have fallen across northwest Europe in recent weeks. German temperatures this week are set to be 2.38 degrees Celsius colder than the four-year average, so significantly higher consumption is expected, said the regulator in a note.

The country has already faced a tight moment this week. On Wednesday, a grid operator in southwest Germany asked users to reduce power demand for an hour after requesting imports from Switzerland to help balance its network.

“Saving gas will prevent storage sites to be depleted too quickly and will help Germany also for next year’s winter,” said Sebastian Bleschke, head of INES.