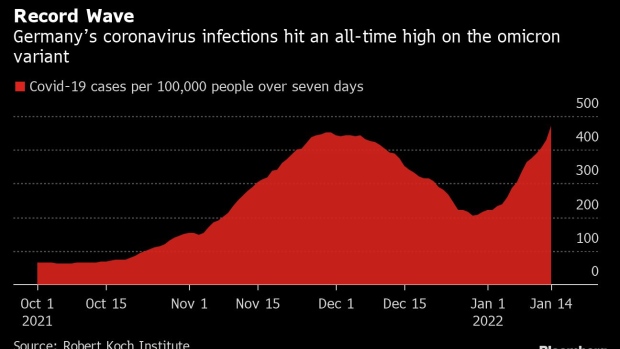 (Bloomberg) -- Germany warned that letting Covid-19 spread uncontrollably would lead to otherwise avoidable deaths even if the omicron strain is less severe than previous variants of the virus.

“There is still no reason to sound the all-clear,” Health Minister Karl Lauterbach said on Friday in Berlin. If authorities give the virus free rein, “the number of victims that we would then be mourning is unknown and certainly would be too high.”

Germany is in a “special situation” due to the relatively large share of elderly people who are not vaccinated, he added.

His comments push back against suggestions that the virus be treated as an endemic disease, like the flu. Lauterbach, a Harvard-educated epidemiologist, instead said Covid still has serious consequences and could mutate again to be more severe.

Germany reported a third consecutive daily record in new infections Friday, and the seven-day incidence rate per 100,000 people climbed above the previous peak reached at the end of November.

Even as infections skyrocket, the number of Covid patients in intensive care has fallen to less than 3,000 from nearly 5,000 in early December. While that’s more evidence that omicron causes less serious symptoms, Lauterbach ruled out any move to ease curbs on social contact, which is down about 50% from pre-pandemic levels.

People may need an updated vaccine later this year, and it’s possible that unvaccinated people who get omicron now will still be susceptible to delta infections next winter, according to Christian Drosten, director of virology at Berlin’s Charite hospital.

“The big speculation is how will it be next winter,” he said at the same press briefing. “Next winter is the deciding thing. How will the pandemic continue and will we have reached enough immunity?”