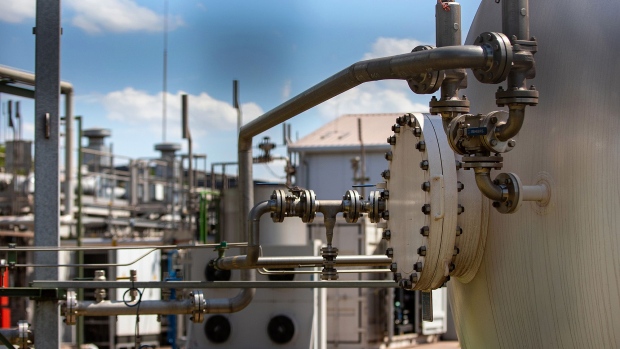 A storage tank in the Proton Exchange Membrane (PEM) electrolyzer, a hydrogen plant that is part of a green steel project, at a mill in Salzgitter, Germany. , Photographer: Krisztian Bocsi/Bloomberg

(Bloomberg) -- Germany is considering providing aid for a 10 billion-euro hydrogen project in Namibia, according to people familiar with the matter.

The country’s state-backed development bank KfW is currently in talks with the Namibian government and the German-South African consortium Hyphen Hydrogen Energy about a possible state guarantee or loan, the people said, asking not to be identified as the discussions are private.

German Economy Minister Robert Habeck hinted at financial support for the project during a visit to Windhoek on Monday, where he said “the investment sum of around 10 billion euros almost equals the annual gross national product of Namibia.”

The project, which will be located near the old colonial port town of Luederitz, will use solar and wind power for the production of green hydrogen which would then be turned into ammonia and shipped to Germany. Namibia’s Skeleton Coast on the Atlantic Ocean is ideal for green-hydrogen production due to an abundance of sun and wind.

Countries in Europe and particularly Germany are racing to secure alternative sources of energy from across the globe after a shortfall of Russian pipeline gas following its invasion of Ukraine.

German energy giant RWE AG is currently building a second ammonia terminal back in Germany, and recently signed a memorandum with Hyphen that could see it offtake up to 300,000 tons per year of green ammonia, a hydrogen derivative that is particularly suitable for transport by ship.

“We have a great demand for green ammonia in Germany,” Habeck said.

The hydrogen plant could produce up to 20 terrawatt-hours, according to Rainer Baake, a special German government envoy for German-Namibian climate and energy cooperation. A quarter of this energy would be enough to cover Namibia’s power demand, which is currently about 5 terrawatt-hours. Namibia could therefore become the first carbon neutral country on the African continent and become independent of electricity imports from neighboring South Africa.