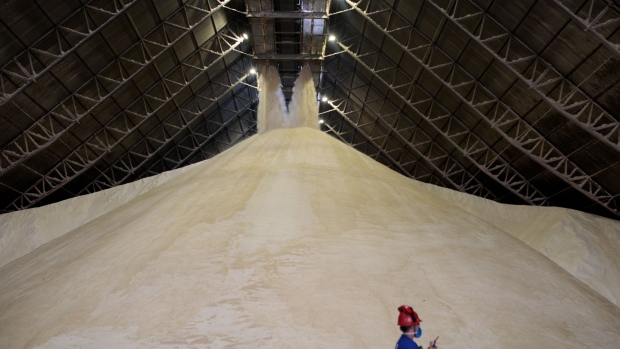 A worker checks logistics while sugar falls into a pile inside a Copersucar storage facility in Port of Santos in Santos, Brazil, on Wednesday, March 3, 2021. The queue of vessels waiting at ports in Brazil, the worlds top sugar and soybean producer, is so gigantic that bottlenecks will likely still be there in May, when sugar normally starts being put through some of the very same terminals. Photographer: Patricia Monteiro/Bloomberg , Bloomberg

(Bloomberg) -- Brazil is set to flood the world market with sugar as the transition to electric vehicles slashes demand for crop-based biofuels, according to a study led by an influential industry executive.

Demand for ethanol, made mostly from sugar cane in Brazil, will likely start to decline in 2030 as EVs become more widespread, said Soren Jensen, the former chief operating officer of top sugar trader Alvean, who authored the study together with Mariana Perina Jirousek. That will leave millers in the world’s top sugar exporter with no option but to make more of the sweetener.

The shift in Latin America’s biggest economy is a blow for the world sugar market, with the pain of global surpluses and lower prices set to be felt in places like Thailand and India, which have a higher cost of production. It’s also a setback for producers including Raizen Energia SA and BP Plc, which have recently expanded their capacity to produce ethanol.

“It is clear that an adaption of the new technologies will pose a significant threat to the Brazilian sugar milling sector,” said Jensen, who has had a three-decade career in agribusiness. “Players in this industry should start to take it into consideration when making investments decision gradually from now on.”

Demand for ethanol, which in some years account for more than 50% of all the sugar cane crushed in Brazil, could start declining in 2025 and fall about 40% through 2035, according to the study’s worse scenario. From 2035 to 2040 a further 20% would be lost, leaving demand at merely 40% of current levels.

Brazilians have used ethanol as a fuel since at least the 1970s. Demand skyrocketed after the 2000s, when the auto industry started making flex-fuel cars, which can run solely on the biofuel or on a blend of ethanol and gasoline. Brazilian usually choose one fuel or the other depending on price.

Brazilian millers can quickly switch from sugar to ethanol production, allowing them to respond to changes in the world sugar market. In times of surpluses, companies made more ethanol, in many cases erasing the global sugar oversupply. The adoption of EVs means Brazil will lose its ability to balance the sugar market, hurting other producing countries already contending with declining demand as health-conscious consumers shun the sweetener.

Over the last 15 years, this flexibility has been as a major shock absorber in years of oversupply of sugar, Jensen said. Without it, prices will become more volatile, he said.

The severity of the impact of the adoption of electric cars will depend on the speed of change, according to the study. In the worst case, the authors consider that plug-in hybrid cars will prevail in Brazil’s EV landscape as ride-sharing apps become more widespread.

“This is because intensive-use cars consume six times more and have a stronger economic incentive to change to a lower variable cost provided by hybrid and electrical cars,” according to the study.

“Furthermore, it is probable that at least the car sharing apps will impose clean technologies on their drivers early,” Jensen said.

Brazilian auto-makers have already started to look for a role for ethanol. Japan’s Nissan Motor Co. has partnered with Sao Paulo’s Energy and Nuclear Research Institute to develop a technology that uses the biofuel to produce hydrogen to feed EVs. Germany’s Volkswagen AG and Robert Bosch GmbH are starting to assess the scenarios for an ethanol fuel cell.

Electrification will take place no later than five years after it has happened abroad, said Antonio Filosa, chief operating officer of mobility provider Stellantis in South America. The delay will “allow us to experiment,” said Filosa, who believes there will still be a future for ethanol.