Decreased competition and supply chain crunch will cause food prices to raise by 7% in 2022: Sylvain Charlebois

The average Canadian family is predicted to pay an extra seven per cent on their annual grocery bill in 2022 as food prices are expected to hit new records, new research has found.

According to the 12th edition of Canada’s Food Price Report, the annual grocery bill of the average Canadian family of four will increase by $966 in the new year, climbing to a total of $14,767. That is a seven per cent increase compared to last year, which is the biggest jump ever predicted by the annual report.

In addition to rising prices and labour market challenges, researchers expect food retailers could see increased rates of theft, food programs may face surging demand, and the growing effects of climate change will continue to be felt in more dire and urgent ways.

Food insecurity is also likely to persist, thanks to wages failing to match the pace of inflation, the report said.

“This is not to say we haven’t seen a lot of resilience and adaptability in Canada’s food supply chain during this past year,” said Sylvain Charlebois, project lead and director of the Agri-Food Analytics Lab in Nova Scotia.

“But the fact is, inflation alone reached an 18-year high and there’s many other factors from the pandemic we have yet to fully understand the scope of… Coming out of this crisis won’t be easy for the food industry and neither will it be for many Canadians’ pockets.”

According to the report, consumers saw much of this coming — pointing to a 2021 study on inflation that found 86 per cent surveyed Canadians perceived food prices to be higher — with meat being the food category in which the highest proportion noticed a price hike. 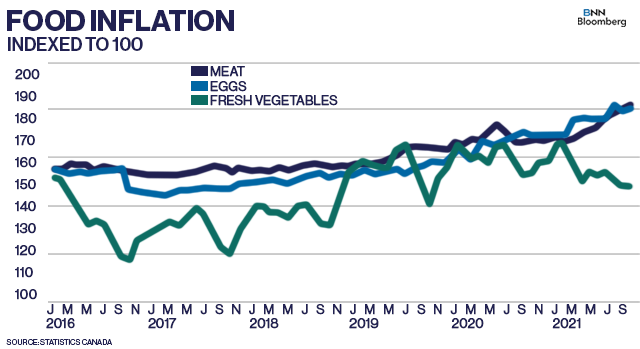 It’s a phenomenon known as “meatflation,” which has been around well before the pandemic, but became more pronounced since the onset of COVID-19, said Charlebois.

“Just look at our own predictions from last year,” he said. “We had a forecast for up to 6.5 per cent price increases with meat, which many people thought was way too high. And in reality, that actually rose by 9.5 per cent — which is much, much higher than most other categories.”

The “industry trifecta” of chicken, pork and beef has always competed amongst itself in markets across Canada. Yet, during the pandemic, a majority of the trends affecting one type of meat has also been seen with others.

“It’s just not meat though. Almost all animal products — including eggs, dairy and whatnot — are also like this,” said Charlebois. “In many ways, there is a perfect storm happening because labour shutdowns and transportation issues are still continuing to be seen all over the world, and that impacts animal products in more ways than other products.” 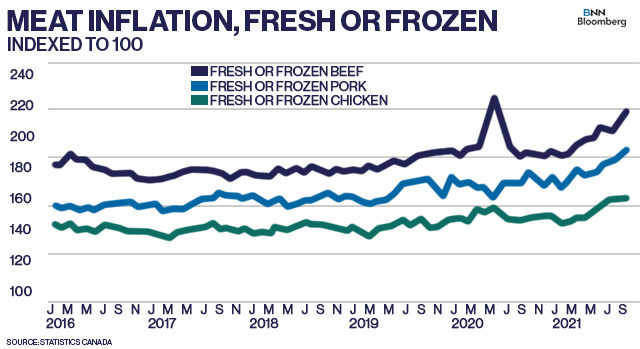 “There is a lot of noise out there about the plant-based category. And it’s certainly giving many consumers viable options with better price points than meat which didn’t exist before,” he said. “But there is a lot of growth yet to be seen or felt there.”

Meat prices are further expected to rise by up to two per cent next year. Overall, however, dairy products have been given a much higher forecast of an up to eight per cent increase.

Charlebois said that’s just the tip of the iceberg and that Canadians should start getting used to soaring food costs.

“It might be an unpopular thing to say, but I think we’d gotten accustomed for the longest time to a much lower cost of food than what makes sense in the long-term,” he said. “I’m talking about decades from the ‘70s up to the early 2000s. And I think that era ended when the financial crisis of 2008 happened. We’d all better get used to the version of that we’re seeing now.”