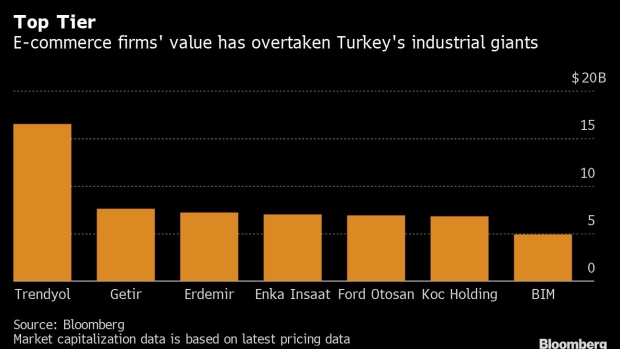 (Bloomberg) -- An early backer of Getir is preparing for its next act as it comes off a gain of nearly 6,000% in the value of its investment in the Turkish delivery app.

Re-Pie’s latest fintech investment in Colendi, a financial services platform with 2.4 million users, was made at a $120 million valuation, just below what Getir fetched when the asset manager backed it in 2018.

“Colendi ticks all the boxes to be the next unicorn of Turkey,” Emre Camlibel, chairman of Re-Pie, said in Istanbul.

Getir, alongside e-commerce platform Trendyol, is leading a crop of tech upstarts that’s shaking up the pecking order of Turkey Inc. Hepsiburada.com, another large online shopping platform, this year became the first Turkish firm to list on Nasdaq.

While Turkey staggered from crisis to crisis, investors poured around $3.2 billion into the nation’s startups this year, more than the industry pulled in over the past decade combined. Last year, Turkish startups raised a total of only $177 million, according to StartupMarket data.

Istanbul-based Re-Pie, founded in 2015, manages 3.8 billion liras ($445 million) of assets. It invests in technology and innovation-focused companies from the startup stage to pre-IPO deals.

The company made a partial exit from Getir, distributing a dividend of 275 million liras to its investors. Camlibel wouldn’t specify the size of its current holding. It has investments in about a dozen companies through its private equity funds.

Currently ranked the 17th-largest by assets among 48 portfolio management companies in Turkey, Re-Pie aims to crack the top 10 in the next five years.

While the pandemic fueled a boom in e-commerce, buy now, pay later programs have also surged in popularity as a way to defer payments on purchases. Annual transactions in the segment worldwide could increase 10- to 15-fold by 2025 to more than $1 trillion, according to a March report by CB Insights.

But the model is also under scrutiny from regulators in the U.K., with the Financial Conduct Authority saying earlier this year that it will start regulating the sector. The approach has faced criticism that it can encourage people to spend more than they can afford.

The investment momentum for the industry is now also building in Turkey, a country that boasts a wealth of home-grown phone apps and where mobile penetration is almost 100%. Home to nearly 84 million people, Turkey has the youngest median age in Europe at just over 30.

“Looking at the demographics of the country and changing consumer habits, we see that the tech-boom will continue to expand,” Camlibel said. “Conventional banking won’t disappear but we will see a massive boom in digital banking.”

Re-Pie recently committed $12 million in Colendi, which provides access to loans, as part of its $30 million investment round. Colendi’s initial investors included Aslanoba Capital, Bogazici Ventures, and Next Ventures.

Turkey is now abuzz with investment opportunities as it draws in more global names.

“Turkey’s entrepreneurial ecosystem has come to a certain level with the backing of the public sector, which offers tax advantages both for the entrepreneurs and investors,” Camlibel said. “Going forward we will see more global players investing in Turkey.”