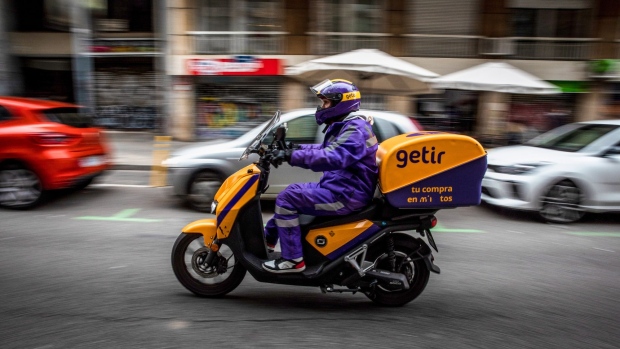 A courier for the food delivery service Getir, operated by Getir Perakende Lojistik AS, rides along a street in Barcelona, Spain, on Saturday, Feb. 12, 2022. The Istanbul-based company, which raised $1.1 billion in total through several rounds from investors last year, has grown to become one of the most valuable rapid delivery startups. , Bloomberg

(Bloomberg) -- Getir, one of the largest rapid delivery startups valued at $11.7 billion just two months ago, has become the latest high-profile startup to cut staff in a bid to rein in costs.

The Istanbul-based startup, backed by Mubadala Investment Company and Sequoia Capital, raised $800 million in March. It is now planning cuts of about 14% of its headquarter staff, blaming “rising inflation and the deteriorating macroeconomic outlook,” according to a memo seen by Bloomberg.

U.K. rapid grocery startup Zapp is also planning cuts of up to 10% of staff, according to a person familiar with the matter.

The potential lay-offs come after a wave of high-valued startups began retrenching, targeting cost-cutting and profitability instead of rapid growth. On Tuesday rapid grocery delivery app Gorillas Technologies GmbH announced it was cutting 50% of its global office staff, or around 300 workers, according to a Gorillas spokesperson.

Fintech startup Klarna also said on Monday it was preparing to let go staff as the war in Ukraine, inflation and likely recession forced the startup to cut costs.

The rapid delivery industry is also consolidating at speed. In November, Getir bought UK rival Weezy, while London-based service Jiffy is currently winding down its business delivering groceries and shifting to focus on building software for delivery firms.

Zapp has signed an exclusive agreement with Jiffy to market its service to their customers, according to a person familiar with the matter, who asked not to be identified because the news isn’t public. Under the agreement, Jiffy will run campaigns directing its more than 50,000 customers to Zapp, the person said. Zapp will not take over any of Jiffy’s warehouses or employees under the deal.

Zapp, which raised $200 million in January, also recently proposed some store closures to increase efficiency at fulfillment hubs in London, a separate person said, adding that the company planned to close its only hub in Manchester and shuttered sites in Bristol and Cambridge earlier this year.

Spokespeople from Geitr and Zapp declined to comment. Techcrunch first reported the cuts to Getir’s staff.