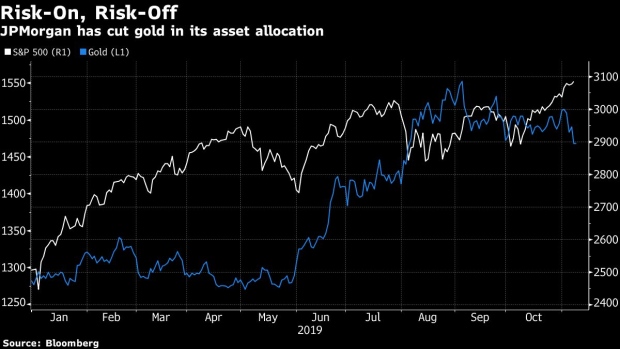 An employee arranges one kilogram gold bars at the Perth Mint Refinery, operated by Gold Corp., in Perth, Australia, on Thursday, Aug. 9, 2018. Demand for coins and minted bars was a little sluggish over the past year as Donald Trump's earlier win in the presidential poll prompted investors to divert funds into stocks, bonds and property, said Perth Mint's Chief Executive Officer Richard Hayes on Aug. 8. Photographer: Carla Gottgens/Bloomberg , Bloomberg

(Bloomberg) -- Strategists at two giant Wall Street banks closed out their bets on gold as the traditional haven gets a hammering from investors shifting to risk-on mode.

JPMorgan Chase & Co.’s asset-allocation team including Marko Kolanovic, Nikolaos Panigirtzoglou and John Normand said it unwound its gold hedge, moving to an underweight recommendation from an overweight one. Citigroup Inc. strategists including Jeremy Hale abandoned a long position in gold, in their asset-allocation note Thursday.

The rejigging comes amid the worst week for gold since May 2017, when riskier assets were propelled by the story of synchronous global growth and havens were in little demand. Bonds have also been losers, and the two teams made adjustments there as well: Citigroup opened a short bet against German bunds, and JPMorgan went more deeply underweight on its government-bond position.

Indications that Washington and Beijing are heading toward an interim deal to halt the trade-war, and some signs of stabilization in the global economy’s slowdown have driven market shifts in the past month.

Citigroup isn’t going whole hog on the reflation trade, however. Its strategists still see an elevated risk of an American recession in the second half of 2020, and refrained from cutting their long position in Treasuries.