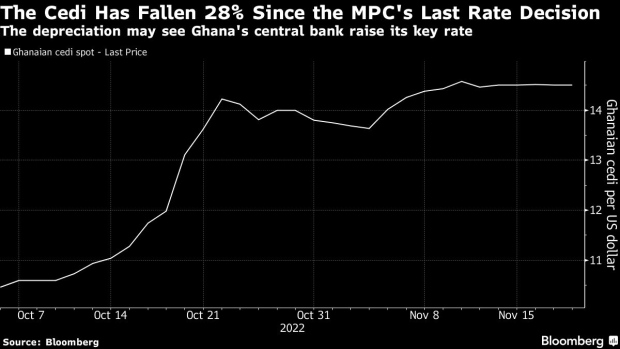 A vendor counts Ghana cedi banknotes at a market in Accra, Ghana, on Tuesday, Oct. 23, 2020. Ghana is missing out on a rally of African bonds as investors fret about an expansion in spending and borrowing ahead of elections in December. Photographer: Cristina Aldehuela/Bloomberg , Bloomberg

(Bloomberg) -- Africa’s second-most aggressive monetary authority after Zimbabwe is set to show Ghana’s resolve once again by raising interest rates at its final meeting of the year to boost investor confidence and bolster the cedi.

Cumulative rate increases of 11 percentage points since November have done little to rein in inflation that’s now quadruple the top of the central bank’s target band of 6% to 10%. Although policymakers prefer to keep borrowing costs above inflation in order to attract investment, the upswing in prices has left Ghana with some of the most negative real rates in the world.

Most economists surveyed by Bloomberg predict the monetary policy committee will hike on Monday, with expectations ranging from half a percentage point to 5.5 percentage points. Two expect a hold at 24.5%.

Razia Khan, head of research for Africa and the Middle East at Standard Chartered Bank, said in a research note the rate decision “is too difficult to call.”

The cedi, the world’s worst performing currency this year, has depreciated by almost 28% since the MPC raised borrowing costs by 250 basis points on Oct. 6. The nation’s debt is junk and it’s now asking bondholders to accept losses on their investment.

Inflation has been fanned by surging commodity prices stemming from Russia’s war in Ukraine and the plunging cedi. Finance Minister Ken Ofori-Atta said in his annual budget presentation Thursday that Ghana has had to make strenuous efforts to meet its import bill, which exceeds $10 billion a year.

“Considering that the cedi continues to depreciate and international commodity prices remain at elevated levels, it is likely that we have not seen the peak of inflation yet,” said Pieter du Preez, senior economist at Oxford Economics Africa, who is forecasting a 200 basis point increase.

Ofori-Atta assured investors on Thursday that the central bank will continue to monitor inflation developments and respond appropriately to contain price pressures, using interest rates and other tools.

The Bank of Ghana earlier this month said it will no longer provide foreign exchange for the imports of rice, bottled water, poultry, fruit juice and other “non-critical goods,” according to a circular sent to lenders as part of measures to prevent a slide in the cedi and contain inflation.

Bottled water prices rose 64% in October and fruit and vegetable juices 54% from a year earlier.

The government has also taken its own steps to help. It’s ordered large gold-mining companies from Jan. 1 to sell a fifth of the metal they refine to the nation’s central bank, as Ghana embarks on a plan to barter bullion for fuel.

Complicating the calculus for the MPC are concerns about economic growth. The S&P Global Ghana Purchasing Managers’ Index has been below 50 since February, indicating a deterioration in business conditions.

Increasing economic hardship has fueled protests and led to calls for the finance minister to resign. It’s also prompted the nation to seek an $3 billion economic program from the International Monetary Fund.

Goldman Sachs Group Inc. economists, who predict the MPC will hike by 250 basis points on Monday, said they expect Ghana could reach an agreement with the IMF staff in the next month or two. “If this takes place, we think it would provide some anchor for the cedi as well as for monetary policy and inflation.”

--With assistance from Paul Richardson.